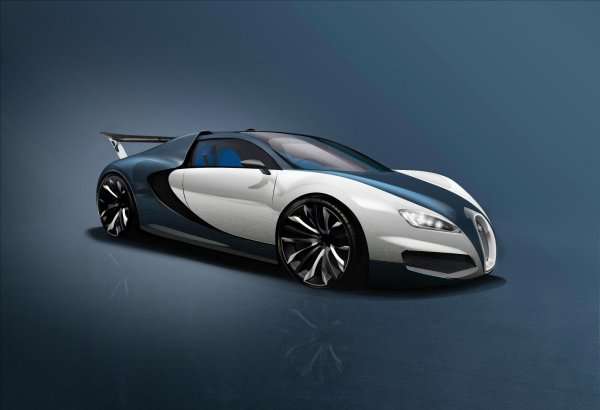 What if the supercar you are building is so fast, it cannot actually be driven at its fastest speed without surpassing limitations beyond the carmaker's control? Chances are, you are Bugatti.
Advertisement

Although it hasn't been named yet, a few specifications of the latest supercar that Bugatti is working on to be the next-generation of the Veyron have been hinted. Using their insider connections at the company, Autocar found out a few details about the new car and created a mockup of what they think a new Veyron would look like (above).

There's one major problem, though. The only tires available that can withstand those kinds of speeds aren't exactly road-worthy. Or even car worthy, for that matter. They're aircraft tires. It should be noted, of course, that this doesn't mean a manufacturer cannot make road-worthy tires for the Bugatti. It's certainly not going to bother potential owners much if tires for their new supercar will cost thousands of dollars each.

As for specifications for the Veyron heir? It will be a hybrid using the Veyron's 8-liter V16 engine and produce 1500 bph through a seven-speed dual-clutch automatic in a four-wheel drive system.

Bugatti is working on this new car to succeed the Veyron, which has only fifteen units left to be sold before production ceases at 450 units.

More about the Bugatti Veyron successor, including artist's renditions of what it could look like, can be found at Autocar.