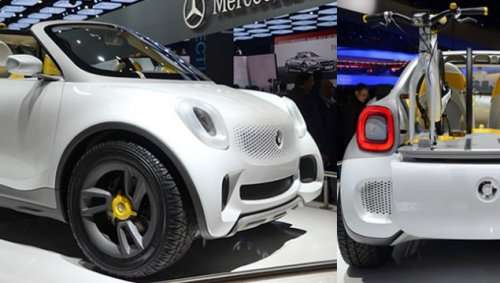 If you are Smart, what do you do when your cars are a complete flop in the North American market? Why, you produce a concept for the area's largest car show of the year that snootily tells your market why they suck. That's what.
Advertisement

Daimler's little Smart unit has been producing diminutive 3-cylinder and now electric cars for markets around the world. So far, they've met with limited success in North America. The term “Smart car” in our vernacular has become equivalent to the real estate term “cozy.” It means it's tiny, uncomfortable, and overpriced.

Smart, apparently angered that it can't sell cars in the U.S., has decided that it's obviously not their fault – it's the fault of Americans and our love of pickup trucks. Obviously, if we were more enlightened, we'd all be clamoring to have a Smart in our driveway. Right?

Enter the For-Us concept. It rolled out at the North American International Auto Show (NAIAS) in Detroit this week. Most of the automotive press either ignored the tiny car (err.. truck) or pretended it was a serious concept, maybe feeling sorry for the company's situation.

Here's the giveaway that this concept is just a joke meant to give Americans a rude gesture involving only one finger:

Need more? That should be enough to convince that this is just a concept created by the smoldering resentment of engineering geeks who weren't able to make it into the big leagues.

The For-Us includes a cargo area of about 3 feet square with a powered tailgate. You can't make this up, folks. Three feet square. Powered tailgate. Smart, of course, shows off how this is ample space to carry their made-for-the-occasion “smart bikes” (see photo) and plenty of other handy things you'd want to haul around. Like, you know, dirt and trees and bricks and stuff. Like in those Ford and Chevy commercials.

The massively powerful 55kW motor (73.7 horsepower) would be capable of pulling a full bed of cargo plus the average boat or construction machine on a trailer. With power to spare for climbing the mountain and doing all of the other stuff you see trucks in commercials doing. Really.

Like a rock: it only rolls downhill! Lock a rock: it gathers moss on its north siiide.

Daimler, for their part, has made it clear that this is only a concept and will never see the light of market reality. Probably a good thing for the sensitive egos of the Smart engineering team.

Anonymous wrote on January 11, 2012 - 3:32pm Permalink
Smart Car would be a definate oxymoron it seems I bought one when they first came out. Waited a year for it. At first it was just uncomfortable enough to make one think that they are saving money but that was wrong..One has to drive the heck out of it to simply keep up with the traffic Thereby negating any fuel savings............then after the fiirst $300 oil change at the selling dealer I got rid. Its a great $7000 car for a third vehicle The trouble is in Canada here it cost us just under $20,000 FOR A VERY BASIC MODEL I got SMART and sold it fast before the word got out that it is a non runner in the game. I went to an auction recently and a 2005 with only 15,000 klms was bid to $4000 Sad really Smart NOT! My fault I was an idiot for buying it
Aaron Turpen wrote on January 11, 2012 - 8:31pm Permalink
I live in Wyoming where you measure wind speed by how big the rooftops coming off sheds are. A guy here in town bought one of the 3-cyl gas Smart cars. He can hardly drive it. Big rigs throw him off the highway, it does horribly in bad weather (snow, ice), and he's barely getting 30mpg out of it. After riding in it, I can say it's less than comfortable for someone over 6 feet in height and it's definitely not safe feeling at all. Roll cage, schmoll cage. So I make fun of these little cars whenever possible. :) Thanks for the comment.
Anonymous wrote on January 17, 2012 - 10:30am Permalink
As far as I got it, they said this car to be an idea how to combine the idea of a pickup truck (space, all terrain, platform) to urban needs (smaller size, zero emission, a platform for sports gear rather than gravel). I do not think they ment it as an offence. The electric smart bicycles on the platform will be sold in Europe (where I actualy come from) starting this year.
Aaron Turpen wrote on January 17, 2012 - 1:33pm Permalink
Given the background of Daimler with this Smart unit and its marketing methods, I highly doubt they didn't realize they'd be giving us the finger with this concept. At any rate, this car is perfect for Europe and the densely populated parts of Asia. It's just not a fit for North Americans.