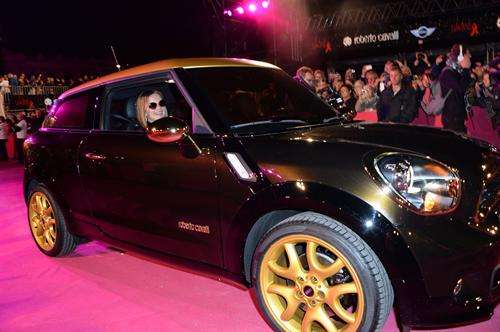 The unique, iridescent MINI was showcased this weekend and auctioned off for a princely sum, with all proceeds going to benefit AIDS research.
Advertisement

As the uniquely designed, one of a kind 2013 Life Ball MINI entered the parade through Vienna this weekend, driven by Roberto Cavalli, it's designer, the car made its first public appearance since it's completion. Entering the Life Ball's Magenta Carpet, the car culminated the costume parade and heralded the beginning of the Ball's final commencement concert that night in Vienna's City Hall Square.

Cavalli, the Italian designer behind the unique MINI, created a one-of-a-kind MINI for auction and BMW has teamed with renowned designers every year since 2001 to do the same. The BMW partnership with designers has meant nearly a million Euros in donations through the auction of these unique one-off designs, all of which have benefited AIDS research.

This year, the 2013 Life Ball MINI with its gold trim, iridescent black-to-brown paint, and hand crafted interior touches from Italy's most renowned designer, was auctioned for a record 150,000 Euros. Past designers have included Dean and Dan Caten, Renzo Rosso, and Donatella Versace.

This year's Ball had a theme of "1001 Nights" and it brought together celebrities from around the world, including Sir Elton John, Hilary Swank, Melanie Griffith, Barbara Eden, Carmen Electra, Bill Clinton, Anna Netrebko, Erwin Schrott, and Fergie. The gala is a fundraiser and awareness event to bring attention and research for cures for the HIV virus.

The auction winner was not announced and will likely remain anonymous - at least until they hit the streets in their new one-of-a-kind MINI with all of its gold trim work.