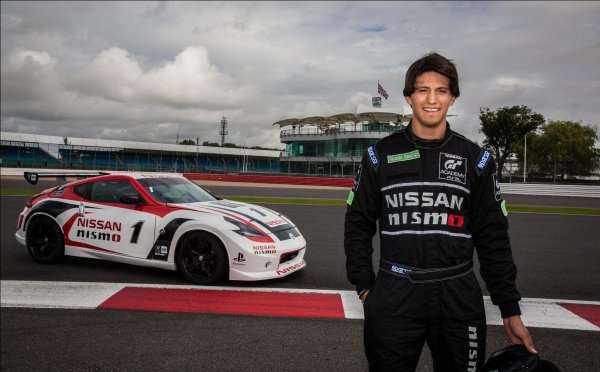 It's every race gamer's dream come true and for Ricardo Sanchez of Mexico, the dream became a reality when he won the Nissan Playstation GT Academy showdown this weekend.
Advertisement

The next time we see Ricardo Sanchez, he will be racing with the NISMO team at the International Dubai 24 Hour race in January. This dream will become a reality for the young rookie thanks to his win of the inaugural Nissan PlayStation GT Academy International Race Camp, in which Sanchez proved that he's got what it takes to go from gamer to racer.

The conclusion for the Camp was at the iconic Silverstone circuit in the United Kingdom, where finalists from the world over congregated after winning various tournamets in regional Gran Turismo game events, then going on to compete in actual cars in various venues. In all, 27 competitors from six different countries were at Silverstone this weekend for the final Race Camp runs.

Ricardo, who is from Toluca in Mexico, is 24 and ultimately came out on top. During the six day event, he and the other competitors completed several events both on and off the track. Racing took place in many Nissan vehicles and under the tutelage of some of the world's finest race drivers and coaches. Sanchez and the others drove the 370Z NISMO, the GT-R, and the 370Z race variants during the week. Challenges off the track included a Mud Mayhem assault course, Micra Stock Car racing, a dirt track time trial in the Juke, Buggy racing, and more. Judges included ex-F1 driver Dani Clos, V8 Supercar legend Rick Kelly, ex-F1 racer Karun Chandhok, rally and drift driver Abdo Feghali, and Thai Formula racer Tor Graves.

For the next four months, Sanchez will continue his training, now directly under the NISMO wing, in a four-month intensive readiness course. In the past, this course has proven to turn amateur greats into professional experts, as witnessed by former GT Academy winners like Lucas Ordonez, Jann Mardenborough, and others in the NISMO lineup.