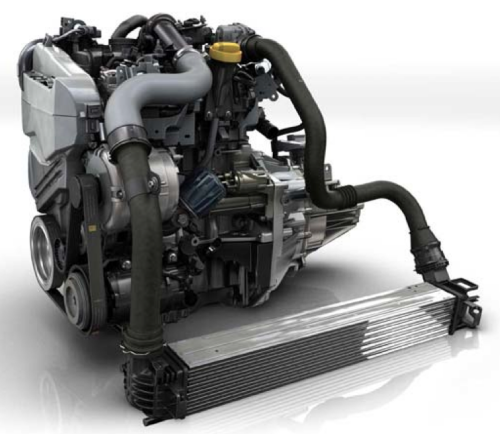 Renault has introduced three new engines in its Energy line for the Megane Collection 2012 at Geneva, with fuel economies up to 67mpg US.
Advertisement

The three new engines are the TCe 115 di, the Energy dCi 130, and the Energy dCi 110 (pictured). The TCE is a gasoline direct-injection engine while the other two are clean diesel technologies, the 110 capable of 3.5 liters/100km, which is equivalent to 67mpg U.S. Each engine has distinct new efficiency technologies to improve performance and reduce emissions.

The Energy TCe 115 is a 1.2-liter gasoline engine and is the first in Renault's line to feature direct fuel injection and turbocharging for fuel-efficient performance. Combined with its double cam-phasing Variable Valve Timing (VVT), it allows maximum torque at low engine speeds. This translates to much more efficient operation at lower speeds. This engine is designed to replace the company's current 1.6-liter, 16-valve and will have more power (115hp vs 110) and better torque ranges (90% or more available at 1,500 to 4,000 rpm).

It also includes a stop-start system with ultra-fast startup. When standing still, each piston's position is recorded and when re-starting, fuel is injected into the most favorably-placed cylinder, making restart instantaneous. A regenerative braking system restores power to the battery for use in re-starting the engine.

Average fuel consumption in the new European cycle (NEDC) is down 25% compared with the 1.6L 16V it's replacing. Economy is up to 44mpg combined in the Megane.

The Energy dCi 110 is a 1.5-liter dCi and already powers one in three Renault vehicles, making it the company's best-selling engine option. In this new version of the engine, engineers at Renault took tech from the new dCi 130 and incorporated it into this best-seller. Fuel consumption dropped slightly while power and torque ranges increased greatly. CO2 emissions dropped by an impressive 15% to 90g/km. That equates to almost 2hp and 2lb-ft of torque per cubic inch of engine.

Most of the improvements are in the intake system, fuel delivery and combustion, and a new turbo architecture. The air intake path was simplified to make it more efficient while a low-inertia variable-geometry turbocharger has been added to increase turbo performance without raising fuel consumption, giving shorter response times in lower revs.

Fuel injection was improved with individualized spray cone angle nozzles, resulting in 15% less unburnt fuel, raising the efficiency and lower the emissions bars. This works in symmetry with the cold-loop Exhaust Gas Recirculation (EGR) system, which pulls exhaust from further downstream than most conventional EGRs and then cools them in a low-pressure intercooler so they can be sent through the turbo and mixed with air, increasing turbo pressure without mechanics. This also cuts nitrogen emissions, the chief culprit in smog production.

Finally, the Energy dCi 130 is a new design based on Renault's experience with Formula One vehicles. The square architecture (piston stroke is similar in diameter to the cylinder's bore) allows large-diameter valves to be housed in the cylinder head to more efficiently fill the combustion chambers. It's rarely employed in production diesel engines outside of racing because of the fuel efficiency cost. Renault, however, has figured a way around that.

The new engine is 20% more fuel efficient than its equivalent-sized predecessor. This is because of several innovations added to the dCi 130. Taking another lead from F1, the engine uses transverse water flow to maximize cooling efficiency while minimizing the size of the water pump, making it more efficient. A double water jacket arrangement allows for more efficient targeting of hot zones as well, further lowering cooling costs. Similarly, the F1 convention of UFLEX oil control ring technology is also employed in the dCi 130.

The real fuel efficiency innovation came from the use of variable swirl technology. When air enters the cylinder, it is rotated (swirled or cycloned) at a given rate in order to help spread fuel droplets and maximize chamber coverage. A simple valve flap controls the swirl, optimizing the air-fuel mix, which raises burn rate and lowers emissions.

The dCi 130 also uses the same EGR system as the dCi 110. The dCi 130 puts out 130hp and has 80% or more of torque available at 1,500 rpm on up to 4,500 rpm. It's much smaller footprint and consumption compared to the 1.9-liter it replaces means huge fuel savings without sacrificing performance.

Frank Sherosky wrote on March 8, 2012 - 4:47pm Permalink
I would like to see the official Renault specs on that 67 mpg figure. Reason is, the last time I saw a figure like that from an ICE, it was a simulation for the Scuderi split cycle engine technology which was 65 mpg. If that 67 mpg figure is indeed reality from Renault (which I would applaud, by the way), then imagine when Scuderi and Tour Engine come out with their split cycle air hybrid versions in both gasoline and diesel. HCCI so far hasn't even come close.
Aaron Turpen wrote on March 8, 2012 - 9:24pm Permalink
It's a diesel engine in a tiny B-segment, so I don't doubt the figure at all. The trucking industry has known the benefits of long-pipe EGR (aka cold-loop EGR) for years and variable-geometry turbos are a huge economy improver as well. Both VW and Audi use a traditional EGR for their TDIs, which adds choke to the engine (sending hot soot into the chamber). They make up for this with higher turbo pressure, but that can only go so far. I think this new way of doing things will soon become the norm. Besides, if a TDI Jetta Wagon (with a much larger bore) that weighs almost 40% more than the little Megane can get 48mpg, I see little reason to doubt Renault's numbers. I can't link to the original media release from Renault here, but it states "3.5 litres/100km" NEDC, which I translated to be 67mpg US, though the math actually says 67.2 (I originally did it using a conversion chart). You should be able to hit "edit", Frank, and see the link to sources inside the system.