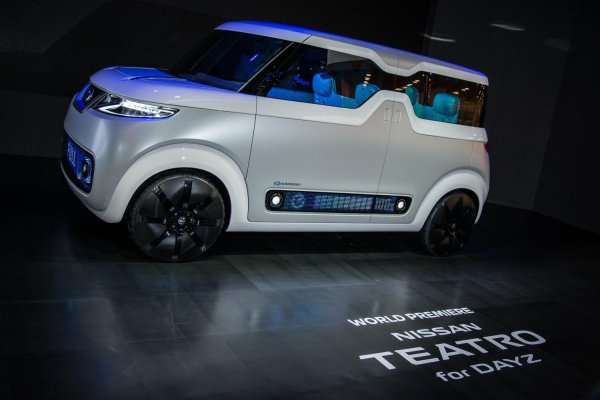 Nissan's Teatro for Dayz is the True Apple Car

If Apple were to actually make a car, it would look like the Nissan Teatro for Dayz concept shown in Tokyo.
Advertisement

Nissan unveiled a new concept car at the Tokyo Motor Show called the Teatro for Dayz. The term "car" is used loosely, as this is largely a digital canvas that happens to have four wheels.If Apple were to build an "iCar," it would look like this Nissan.

Designed for the generation now called the "digital natives," the Teatro for Dayz is aimed towards the current generation of young adults who've never known life without digital access to games, the Web, instant messaging, etc.

"Designing a car to appeal to the generation we call `share natives' required us to intentionally not use knowledge and tried-and-true approaches we had amassed," says Executive Design Director Satoshi Tai. "For example, through design we typically try to convey a sense of acceleration, power, or supreme quality. But these values do not resonate with share natives. If anything, such car traits just call to mind old-fashioned technology that bears little relevance to their lives."

Nissan says that they've put a lot of effort into researching this upcoming generation of potential car buyers and the Teatro for Dayz is the result of that ongoing research. The car is as much a digital canvas as it is a car. The interior is basically four seats and a lot of video screens. All of the knobs, switches, and so forth that we see beyond the steering wheel are gone with virtual and completely configurable displays replacing them.

This is the "Future Canvas" interior concept: the appearance can transform according to your whim. Image display technology supports this concept — turning seats, headrests, door trim and the instrument panel into a moving screen.

Tai explains: "The interior can be visually altered according to one's mood, for playing games, and in the blink of an eye to surprise friends. What Teatro for Dayz is, how it's used, and what it could become are all up to the share native's imagination."

Nissan made another unexpected turn with Teatro for Dayz's inorganic yet warm exterior design. "We adopted Nissan's signature V motion grill and headlamps," Tai says, "but dropped the usual components that express aggressiveness: speed, size, elegance, and other traits you would expect to see on a car. This car's identity belongs to the owner, and design assumptions we make just limit their creativity. This could also be seen as an indication of what people will expect of EVs in the future."

With an exterior color scheme of satin white silver between full gloss white, the vehicle is made to resemble leading-edge handheld technologies.