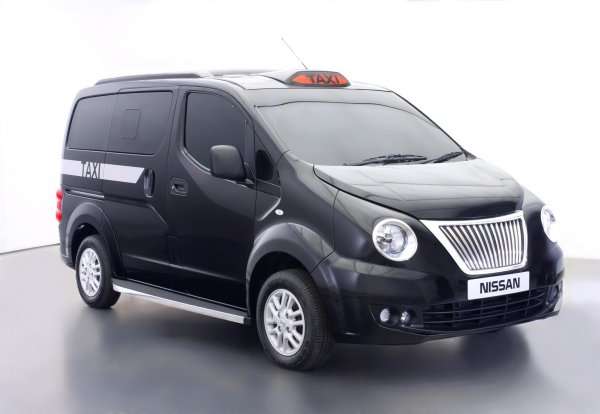 Nissan unveils the new face of the London Taxi

Nissan's new London Taxi is unveiled in Europe, designed by the company's European design center in Paddington, with production launch planned for late this year and a zero-emissions version early next.
Advertisement

Nissan has unveiled its Taxi for London design based on the instantly-recognizable and iconic black cab of London. The taxi, based on the NV200 platform, is similar to the Taxi of Tomorrow unveiled a few months ago in New York City, but tailored towards the Londoner crowd and that city's black cab reputation.

Created by Nissan Design Europe in Paddington, England, the London Taxi will launch in December of this year with a 1.6-liter petrol (gasoline) engine and automatic gearbox. A zero-emission, all-electric version based on the Nissan LEAF will be released in early 2015 as well. The London Taxi had to meet strict regulations set forth by the Taxi for London requirements that govern Hackney Carriages.

The standard NV200 global taxi platform was modified for London to include rounded headlamps and a re-molded grille to give it a "black cab" face. LED lighting was added to improve visibility while new front bumper panels were designed for the London standard. The cab also has a slightly tighter turning radius to meet the 7.6 meter (25-foot) requirement of TfL.

Design Excellence Manager at NDE, Darryl Scriven, said: "Having already overcome the unique technical challenges presented by the development of a new Hackney Carriage for London ahead of our launch of the vehicle in August 2012, we turned our attention to making the vehicle look the part. The Mayor's office and taxi drivers were very keen that we maintain the character of the Hackney Carriage, making it something that people in the city can be proud of.

"The main challenges were concerned with making sure customers can easily recognize it as a taxi. Being in London, we were able to go out and talk to cabbies about what was important to them as well as look at the vehicle from a customer's viewpoint. It's unusual for us to be able to work on something as bespoke as this, specifically for one location in the world and we are very proud to have been asked to do so."