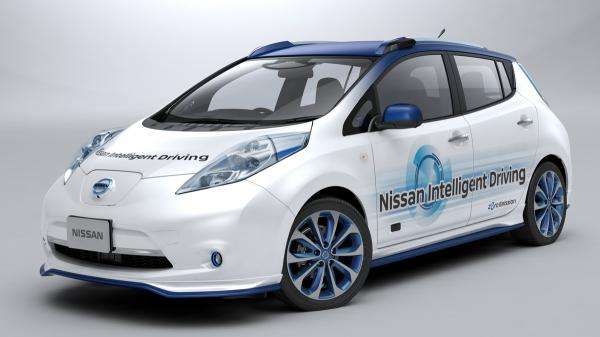 Nissan's new Piloted Drive was its latest technology showcase at Tokyo and a LEAF prototype equipped with the autonomous car tech is taking to public streets and highways for a test run.
Advertisement

Testing on both highway and urban, city streets has begun for the self-driving prototype based on the Nissan LEAF. The new Piloted Drive vehicle was first introduced at the Tokyo Motor Show earlier this week and is now undergoing street use to validate its programming and continue development of the technology.

Nissan has two corporate visions it's putting at the forefront of this technology: Zero Emission and Zero Fatality. The first is a goal of putting zero emissions vehicles on the road, such as the best-selling electric car of all time, the Nissan LEAF. The second is to defy Mortal Kombat with a no-fatality goal by reducing traffic accidents to near-zero through artificially intelligent safety technologies and self-driving vehicles.

On that latter point comes Piloted Drive, a part of the overall Nissan Intelligent Driving program. NID will roll out in various stages over time as development and various legal and insurance frameworks permit. The first stage, Piloted Drive 1.0, is aiming for a 2018 release with a more robust version coming two years after that (2020). Piloted Drive 1.0 will allow autonomous driving under heavy highway traffic conditions, going just beyond what can be done currently with adaptive cruise control and active safety technologies. Piloted Drive 2.0 will up that game by adding the ability to navigate most city and urban streets, including intersections, which are problematic for their potential complexity.

Technologies for these systems go beyond computer programming, however, and include things like millimeter wave radar, laser scanners, high-speed computer processors, and specialized interfaces for human interaction (called HMI or human machine interface).

Nissan has developed two innovative technologies that can make piloted drive possible on city/urban roads. The first is the miniature, high-spec laser scanner. Currently in its prototype stages, the laser scanner determines the distance between the vehicle and its surroundings through the use of precise three-dimensional measurement that enables the vehicle to navigate routes in tight spaces.

The other new technology is an 8-way, 360-degree view camera system that allows for accurate routing decisions when driving through intersections and sharp curving roads.

"We at Nissan are setting clear goals and preparing for the implementation of piloted drive," said senior vice president of Nissan, Takao Asami. "The prototype that we're introducing here today is proof of how close we are towards the realization of this goal. Nissan aspires for a safe and trouble-free motoring future, and we plan on leading the industry in the implementation of piloted drive."