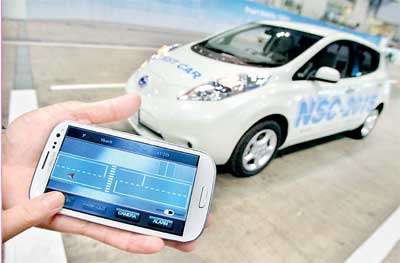 Nissan Motor Co is showing the new autonomous driving capabilities of its NSC-2015 prototype at the CEATEC JAPAN 2012 exposition this week. The car is a modified Leaf and will be showing automated parking abilities at the show.

Using a remote monitoring system, the car can recognize surrounding environmental cues. An all-around view camera and 4G mobile connection lets the car "see" its surrounds, no matter its location, marking a departure from the usual GPS-based systems used in some other self-parking vehicles. This also allows the NSC-2015 to synch with a smart phone and utilize applications on the phone for further, future abilities.

A step up from the self-parking of today, the Nissan system allows the driver to exit the vehicle at a convenient location (say at the elevators in a parking garage). The car then drives itself and locates a vacant parking space. It then parks on its own, shuts down and awaits instructions from the driver - which can be given as the driver enters the vehicle or via the smart phone connection and 4G network.

The camera and parking sensors can also act as a security system, transmitting video, still photos, or alerts to the driver's phone. The car can also locate the driver on command and come to them.

A panel at this year's CEATEC JAPAN will involve Nissan's executive vice president in charge of R&D, Mitsuhiko Yamashita. That panel will focus on automated vehicle technologies and is titled Robot Cars Now Up and Running - The World of Autonomous Driving Opened Up by EV. Moderated by Taro Kimura, a journalist, the panel also includes Dr. Sven Beiker, executive director of Stanford University's Center for Automotive Research at Stanford (CARS) as well as Professor Clifford Nass of Stanford and Professor Thomas M. Storke, also of Stanford.

Tesla Contemplates A New Strategy for China Retail even As Sales Boom
Jay Leno on Elon Musk & EVs: “I Think He Should Get ... Credit"
END_OF_DOCUMENT_TOKEN_TO_BE_REPLACED