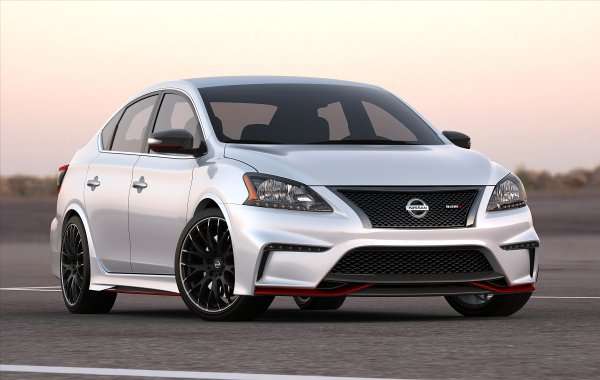 The Tokyo and LA Auto Shows revealed a lot about Nissan's plans, including several concepts and models to be added to the factory performance models in the NISMO line. One of those that is very likely to go from concept to production is the Sentra NISMO concept.
Advertisement

Nissan has promised to slowly expand its NISMO line of factory tuners in order to offer an appealing array of sport options for the performance enthusiast. The latest concept most likely to go to production in the NISMO lineup is the Sentra showcased at the Tokyo Motor Show and LA Auto Show this past week.

The Sentra NISMO concept is based on the latest-generation Sentra, which is already a well-designed car. My time in a 2013 Nissan Sentra for a week as a press loan this year proved it to be a solid entry into the small sedan market - one that has great style, dependable performance, and good versatility for the segment. These are augmented by the NISMO concept's added style points and improved performance metrics.

"Fans have asked that we bring back a high-performance Sentra straight from the factory, just like in generations past," said Nissan Vice President of Product Planning, Pierre Loing. "With NISMO, our in-house motorsports arm already producing versions of the 370Z NISMO, JUKE NISMO, JUKE NISMO RS and upcoming GT-R NISMO, we wanted to demonstrate where we could go in the future."

The conceptual Sentra NISMO is done out in signature NISMO Pearl White with NISMO red details and striping. A high-gloss, carbon fiber cover and inserts for the side mirror covers, front splitter, and rear diffuser complete that look. This imposing presence to fit with the Sentra's contemporary style is a nice touch.

Under the hood, the Sentra gets NISMO tuning to upgrade the 1.8-liter engine to a 16-valve, DOHC producing 240+ horsepower and over 240 lb-ft of torque, putting it beyond the realm of most V6 engines in this small sedan class and besting nearly all midsize sedans as well. That engine mates with a six-speed manual transmission and limited-slip differential.

Chassis improvements include tuning for the independent struts and torsion beam at front and rear (respectively) and custom performance shocks and springs to press down those 19-inch RAYS aluminum-alloy wheels and 225/35R19 Michelin Super Sports.

Inside, the NISMO-inspired Sentra concept has the signature NISMO leather/Alcantara fittings with the Alcantara steering wheel having the bespoke red leather stripe at the 12-o'clock position. A satin carbon fiber finish for the instrument cluster sets off the red tachometer ring and start button.

With all of this, it's obvious that few changes would come were this Sentra NISMO to go to production, which it very likely will. For production, the carbon fiber may be replaced with faux fittings in plastic to save costs, but the car otherwise looks production-ready.

LG's New EV Battery Plant Is a Welcome News for Tesla
Tesla Giga Berlin's New Hurdle: It's Not Only the Gov't, but Now Tesla Itself
END_OF_DOCUMENT_TOKEN_TO_BE_REPLACED