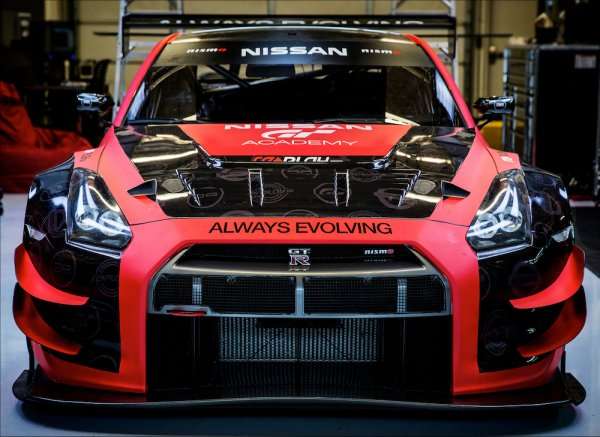 Nissan has parntered with Always Evolving to enter the 2015 Pirelli World Challenge season with two NIssan GT-R GT3 cars. A NISMO and an AE driver will pilot each.
Advertisement

The two GT-R GT3 cars will be racing in the 2015 Pirelli World Challenge season with sponsorships from Nissan, the GT Academy program, and Replay XD.AIM Autosport will provide on-track support during the season, adding a winning history to the total mix for Nissan's entry into the Pirelli challenge.

“Nissan couldn’t be happier to have Always Evolving and AIM as Nissan’s partners to campaign the first GT3 spec GT-Rs in the U.S. in Pirelli World Challenge,” said Rick Kulach, Nissan North America Motorsports Manager. “This partnership is a great opportunity to showcase Bryan’s talents alongside James, who is a rising star in motorsports. It’s exciting to have a GT Academy champion in a great car racing at this level.”

The two cars have also had drivers named. The first will be driven by Nissan GT Academy North America 2011 winner Bryan Heitkotter. The other will be driven by GT star and Australian open wheel driver James Davison. Heitkotter was the first winner of the North American GT Academy and competed in the 2013 season in a 370Z NISMO for Doran Racing, where he earned three pole positions, four top ten finishes, and a podium place. In 2014, he came back to North America and got into an Altima for the CA Sports team. There he took three podiums and four top fives in the Pirelli World Challenge Touring Car division. Heitkotter also finihsed with Nick McMillen as sixth overall in the IMSA Continental Tires SportsCar Series at Daytona last month.

Davison is an Australian who came the U.S. at age 18 to race in open wheel competition. He took a Formula BMW victory in 2005, was runner-up in 2007 at the Mazda Champinship, and took second in 2009 at the Indy Lights. He signed on with Always Evolving for the 2014 Indianapolis 500, finishing 16th and has taken five consecutive poles in IMSA, including the pole at the 2015 Rolex 24 at Daytona.

Always Evolving was co-founded in 2013 by Roger Rodas before his death in a well-publicized car crash which also killed action film star and amateur racer Paul Walker. The other founder, Erik Davis, continues the company whose mission is to race cars and donate portions of the proceeds to charities favored by the co-founders and, incidentally, Paul Walker as well. AE continues to operate in their honor.

The first Pirelli World Challenge Race for 2015 will be at Circuit of the Americas in Austin, Texas March 6-8.