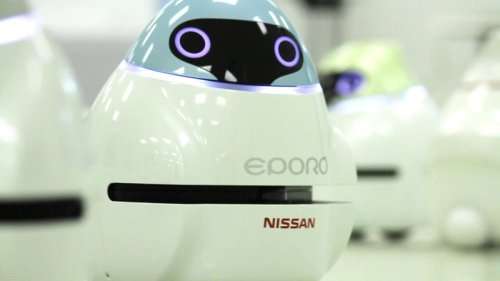 Engineers at Nissan have created a group of robots called EPOROs to study how "fish thinking" could be applied to automotive safety systems. The robots recently visited the United States, along with their creator.
Advertisement

There are seven of these little robots, which Nissan engineer Susumu Fujita began creating in 2009. Their programming has been evolving, but Fujita says it's basically an algorithm that mimics how fish swim in the ocean.

Standing about two feet high and resembling chicks (baby chickens), these robots are a part of Nissan's research into zero emission robot car concepts. They can move around in groups, run solo, or play "follow the leader" - all without running into obstacles or missing their destination. This is the first time the robots have visited the United States, but they have a new second home in Nissan's new Silicon Valley (NRC-SV) facility that just opened this week.

“The technology in these robots is similar to what will be used to build and perfect an autonomous car. The EPORO can already follow the leader, even if the leader is me,” said Fujita in an interview (below).

Today's Nissan vehicles already sport some of the technologies being pioneered by research with these robots. Intelligent Brake Assist and Forward Collision Warning are safety features that stem from the EPORO project.