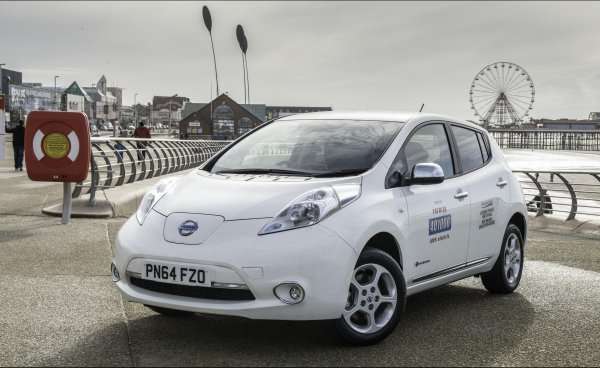 Blackpool, England was one of the first places in the world to introduce electric-powered transportation. Now, it's done it again with the adoption of the Nissan LEAF all-electric taxi.
Advertisement

A new fleet of electric Nissan LEAF taxis have entered service in Blackpool, England. The twelve cabs were introduced by local taxi firm Premier Cabs and will operate in and around Blackpool and neighboring Lytham St Annes all day, every day, 24/7. This marks the second time an electric fleet of vehicles entered the tourist destination's public transportation fleet.

130 years ago, Blackpool was home to one of the world's first electric tramway. There is some contention, but it was likely the first fully electric tram to go into operation publicly. That caused a stir 130 years ago, being on the cutting edge of technology at the time. Now, the city is doing it again, bringing in the world's best-selling electric car as their new taxi.

Premier Cabs has a fleet of around 170 vehicles and plans to replace all of them with electrics, over time. The company bought the dozen LEAF cars with taxi livery from a local dealership and plans to ask Chorley Group Nissan to provide even more as the cab company replaces its fleet. They plan to do so using Nissan LEAF electric cars and e-NV200 Combi electric taxi cab vans.

Vehicles in the cab fleet typically cover about 55,000 miles per year and around 200 fares per week. A dedicated network of five rapid chargers has been established for the EVs, capable of charging a LEAF from zero to 80 percent in about half an hour.

Managing Director, John Cutler, said: “We’ve done the maths and we know the LEAFs will save the business money but that wasn’t the main factor in our decision." It may not have been, but the LEAFs have a running cost of about two pence per mile, saving drivers £80-£120 per week, which they'll pocket. The company hopes that this incentive will mean more drivers, alleviating one of their biggest challenges: driver recruitment.

mike w wrote on March 2, 2015 - 8:32pm Permalink
This cab company should be able to save a ton of money on fuel. With the cool climate in that part of the world the batteries in the cars should hold up well. Best of luck and thanks for going electric.