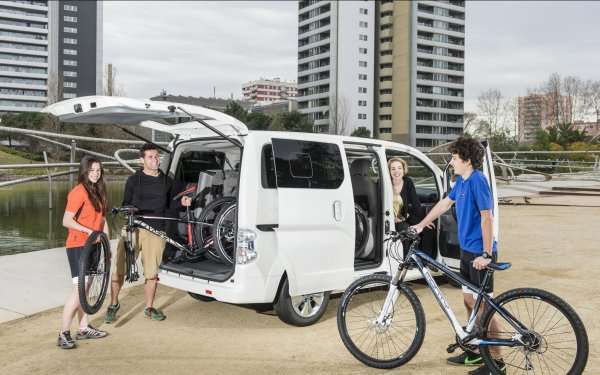 The e-NV200 is offered as a cargo van and a taxi cab, but now it can be purchased as a family hauler as well.
Advertisement

The e-NV200 launched as one of the first fully-electric commercial vans in the world. It's used as a cargo vehicle and a taxi cab. Now, the battery electric vehicle is being offered as a seven-passenger people mover for families and shuttle services.

Nissan says that they created the 7-seat e-NV200 due to requests from companies and fleets and guessed that a consumer market for the van may also be viable. The van was a part of the company's plans for the electric van from the get-go, they say, but its introduction was pushed forward due to demand. They're calling it the e-NV200 Evalia and the Combi, depending on model chosen.

The seven seat version of the e-NV200 is configured with two seats in the front, three in the middle and two in the rear. Both the second and third rows can be folded to allow for larger quantities of luggage to be carried, making the new variant a hugely flexible vehicle for commercial or private use. The second row rolls forward and the third row folds to the sides to open up an enormous 2.94 cubic meters of cargo capacity, which is enough to transport three bicycles with the wheels in place, unique in this class. With all three rows in place, the luggage capacity is 443 liters under the tonneau cover, and up to an impressive 870 liters when measured to the roof line, allowing the possibility to carry seven people and a large volume of luggage.

The new model is available with the CHAdeMO quick charging system. To increase passenger comfort the seven seat passenger version comes equipped with additional rear air conditioning to ensure a more even temperature through the cabin, even for those in the third row of seating.

“We have always planned to offer a higher-seating capacity version of the Nissan e-NV200," said Nissan Europe’s director of electric vehicles, Jean-Pierre Diernaz. "Marketplace demand has meant we have moved this introduction forward by several months to satisfy this need. Nissan has had requests from taxi companies, VIP transfer services, hotels and private motorists who are interested in buying this uniquely flexible and capable vehicle.”

mike w wrote on March 8, 2015 - 6:38pm Permalink
Glad to see this this EV will hit the dealerships lot. I'm guessing its built with the Leaf drive train?