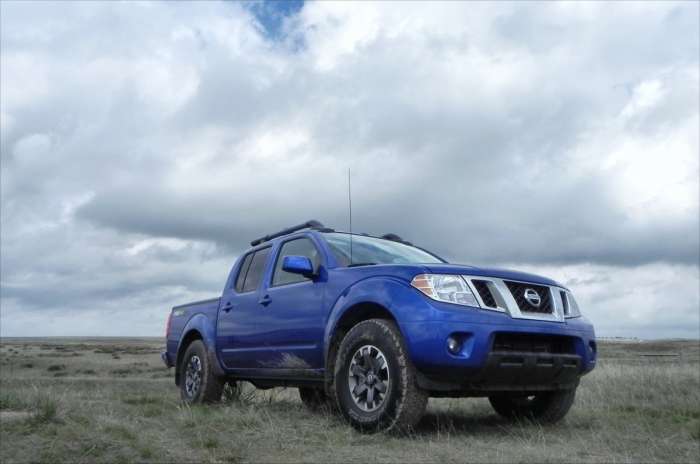 The 2016 Nissan Frontier has several updates coming to keep the little truck fresh. We also speculate on when an all-new, redesigned Frontier might come and what will likely be included with that.
Advertisement

Nissan has announced some minor upgrades for the 2016 Frontier pickup truck. These include three new exterior colors (replacing three others) and some trim level changes. The 2016 Nissan Frontier enters showrooms in September.

The color changes include the introduction of Sunset Orange, Gun Metallic, and Magnetic Black. These replace Metallic Blue, Night Armor, and Super Black. The Frontier Crew Cab SV model sees the sunroof option become standard equipment. The King Cab and Crew Cab body styles remain the choices for body configuration and both 4x2 and 4x4 drivetrain options remain as well. Trim levels include the base level S model with either a four-cylinder or six-cylinder engine option. The SV, Pro-4X, Desert Runner, and SL continue as they were. Engines carry over as well.

We expect that after the introduction of the new Titan XD and the pending announcement of new Nissan Titan designs and configurations for the non-XD models, focus will move to the Frontier with the introduction of a new redesign for the 2017 model year. We expect that this new Frontier would be unveiled early next year at an auto show befitting the small truck's stature.

Our guess is that the engines will remain largely unchanged, though we could see some transmission upgrades. The new Frontier would see body style improvements, building on the truck's rough-and-tumble nature, and fuel economy updates as part of its modernization. With the success of the Cummins-powered Desert Runner concept showed last year, we think that a small diesel engine option is not out of the question. Especially given the attention and expected popularity that the Titan XD seems to be gaining.

Now that Nissan has ended production on the Xterra, Toyota has introduced a new Tacoma, and the GM small truck twins continue with steady acceptance in the market, it's time for Nissan to update the Frontier.