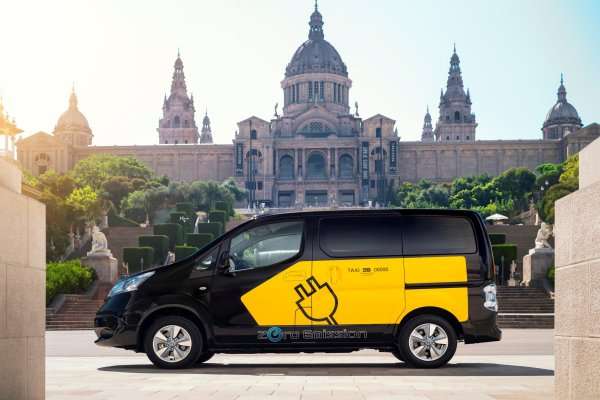 The City of Barcelona in Spain has signed an agreement with Nissan to promote the implementation of the battery-electric Nissan e-NV200 taxi in the city. The city council, for their part, has agreed to install a quick charger infrastructure for the electric taxis while Nisan will provide the taxis to fleets in the city on a priority basis.

The taxi itself, to celebrate the public-private agreement, is one of the primary showcases at the Nissan booth at the Frankfurt Motor Show (IAA). The announcement was made on the stage at Nissan's press event yesterday by Nissan President and CEO Carlos Ghosn when he presented the Nissan e-NV200 Barcelona Taxi to the world for the first time.

The taxi is built on Nissan's popular light commercial van, the NV200, utilizing a converted electric platform from the Nissan LEAF electric car. The NV200 itself has already become a popular taxi cab platform, thanks largely to Nissan's work with New York City in the Taxi of Tomorrow project.

The e-NV200 is a fully re-engineered version of the two platforms, merging the Taxi of Tomorrow conversion for the NV200 and the electrified Nissan LEAF platform that Nissan has been porting into other vehicles for various uses, including the ZEOD RC Formula One car which will feature in FIA races next year. The Barcelona Taxi is the first of what Nissan hopes will be many e-NV200 taxis to be seen around the world.

The Nissan e-NV200 will be built at a factory located in the Zona Franca in Barcelona, where Nissan has invested 100 million Euros to add a line for the new vehicles. Every e-NV200 globally will be built at the factory, further adding to the agreement Nissan has made with Barcelona. It will be built on the assembly line alongside the European NV200 already made there.

The Mayor of Barcelona has highlighted the relevance of the agreement as “a step forward to reinforce the role of Barcelona as a leading city in zero-emission taxis and urban goods distribution”, and has revealed the commitment to progress onto a zero-emission city model, a commitment shared with Nissan.

Further agreement will push the e-NV200 package delivery van as another option for businesses in Barcelona who are looking for a lower-cost, zero-emissions option. So while the taxi cab e-NV200 Barcelona Taxi is getting headlines, other e-NV200 options will bolster the production lines at Nissan's plant near the city. Barcelona's planned quick charging stations will be public and accessible by all who use vehicles that charge with the CHAdeMO standard.