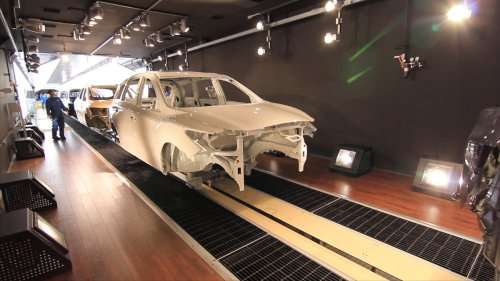 Nissan has opened its new paint wing at its Smyrna, Tennessee production facility, billed as the most advanced paint plant in the world, setting new standards for quality and low environmental impacts.
Advertisement

Nissan's new state-of-the-art facility is built with plant efficiency and emissions in mind. With the addition of the Infiniti JX and the new LEAF as well as the future addition of the Rogue, the production plant needed a higher capacity paint shop.

The new paint wing utilizes a new three-wet paint process that applies all three paint layers in succession, before the vehicle enters the paint-drying oven. Previously, vehicles had to bake after each coat, so this new process saves a lot of time and energy. The new plant, located adjacent to the vehicle assembly plant, replaces the old paint system NIssan has been using for over thirty years. The new facility is 250,000 square feet in total.

In addition to being able to process more vehicles, faster, the plant reduces energy consumption by thirty percent, carbon emissions by another thirty percent, and volatile organic compound (VOC) emissions by seventy percent. This is all part of Nissan's commitment to reducing environmental impacts corporate-wide by 2016.

The plant is the company's "Showcase Project" for the Department of Energy's Better Buildings Better Plants Challenge, where Nissan has committed to reducing energy intensity in its three U.S. plants by 25 percent by 2020. That is part of Nissan's broader global Nissan Green Program 2016, which focuses on reducing impacts globally.

"Nissan is committed to increase energy efficiency as we reduce the environmental impact of manufacturing the highest quality vehicles sold in North America," said Susan Brennan, Nissan's vice president of manufacturing in Smyrna. "These efforts align with our global strategies of zero-emission leadership and corporate social responsibility to employees, stakeholders and customers."

Nissan has previously won Energy Star ratings year-on-year, including Partner of the Year in 2010 and 2011 and the program's highest honor, Sustained Excellence, in 2012. The Smyrna plant itself has received Energy Star distinction for 7 years running. It is also the first passenger-vehicle manufacturing facility to achieve ISO 50001 and Super Energy Performance certificates under the American National Standards Institute (ANSI) and National Accreditation Board.