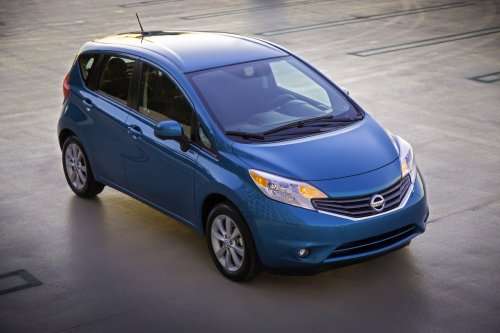 The all-new 2014 Nissan Versa Note made its North American debut at the auto show in Detroit, showcasing the next generation of this popular hatchback.
Advertisement

While the unveiling was somewhat behind the shadow of a brand new concept, the Resonance, the Versa Note is definitely a show stopper on its own. Filled with advanced features and segment firsts, the diminutive car is a showcase of bottom dollar excellence.

With an MSRP of only $13,999 (plus delivery), the 2014 Nissan Versa Note is two thousand above its sedan counterpart (2013 MSRP of $11,990, plus delivery) and almost $700 cheaper than the current model Note. The larger interior space, higher versatility, and 40 mpg highway economy will likely continue to make this a popular choice in the entry-level segment. The Nissan Versa line overall is the top-seller in this segment in the U.S.

New segment-firsts include the Around View Monitor, NissanConnectSM with Navigation System with Hands-free Text Messaging Assistant, and Active Grille Shutter. The Around View is a step forward from rear backup cameras, showing a much larger view of the area behind and all around the car is given during backup and parking. The monitor shows the front and rear view immediately next to a virtual birds-eye view of the car showing information from the corner radars. The view dynamically changes in real-time as the situation warrants. Previously, this Around View option was only available on Nissan's higher-end vehicles.

The Active Grille Shutter system helps the 2014 Versa Note achieve its 40 mpg highway fuel economy, working in tandem with Nissan's advanced continuously variable transmission (CVT). Details on the power plant are not clear, though it's likely to share the 1.6-liter 4-cylinder engine its sedan counterpart has. Update: Nissan has affirmed that it will, indeed, use the 1.6L 4-cyl.

The Versa Note will be a good addition to the Versa compact here in North America. It releases this summer to dealerships around the country and will add competition to the market. Nissan will not be making a hybrid version of the 2014 Versa Note, but did not rule out the possibility in the future.

Competitive Marketplace
The Versa Note will compete against the new Chevrolet Sonic hatchback and Kia Soul, a segment which the Nissan Cube also peripherally competes in, though it is a larger vehicle. The Versa Note is directly comparable to the Sonic and Soul, however, and given the sales history of its sedan cousin, the Versa will have a good chance of continuing dominance here.

Fuel efficiency and price, though, are going to be the dominant selling points for the 2014 Versa Note versus the competition. At its base price, it's nearly $1,000 cheaper than both the Sonic and Soul. In fuel efficiency, the Note beats the Soul and equals the Sonic.