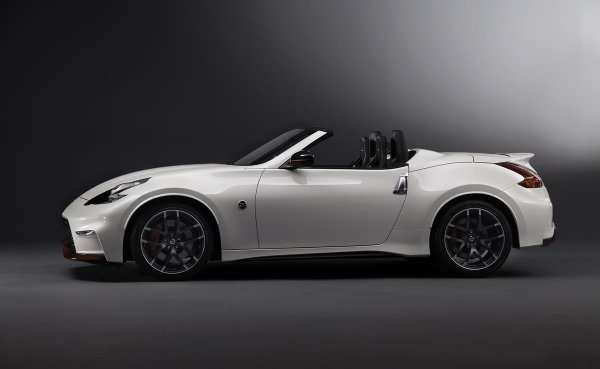 On press preview day for the Chicago Auto Show, Nissan unveiled a new Roadster Concept for the 370Z NISMO. Meant to study interest in a NISMO version of the popular Roadster option for the 370Z, the car has the power of the 370Z NISMO and the fun of the topless coupe.
Advertisement

The 2015 Nissan 370Z sees twenty percent of its sales in the NISMO version, prompting Nissan to consider bringing the popular open-air version of the 370Z sports car to the NISMO stable.

"The idea of adding NISMO levels of look, feel and performance to a Nissan 370Z Roadster is one that we've been considering for a long time," said Pierre Loing, vice president, Product Planning, Nissan North America, Inc.

Most of the design elements for the 370Z NISMO Roadster are taken from the 370Z NISMO itself. The same aerodynamic body, lighting, edges, etc. are all basically the same between the two. The roof, however, is a cloth folding top that Nissan says is expected to be down more than it is up. A single-action top operation with automated roof lock and fixed rear glass are standard.

"With as much attention as the exterior modifications are expected to attract, we knew the interior had to be just as special, especially since with the convertible top in the down position everything is in plain sight," said Loing. "It doesn't disappoint."

Under the hood is the same powerplant as the 370Z NISMO, giving the NISMO Roadster the same engine output at 350 horsepower and 276 lb-ft of torque. Through the same seven-speed automatic transmission with Downshift Rev Matching (DRM). "The majority of 370Z Roadster buyers prefer the automatic transmission, which with Downshift Rev Matching and paddle shifters comes close to the performance of a 6-speed manual - so that's how we specified the 370Z NISMO Roadster Concept," said Loing.

Nissan hasn't issued performance specs for this concept, but we can expect that the 370Z NISMO Roadster will be slightly heavier than the coupe and thus will have a slightly slower 0-60 and 1/4-mile metric.