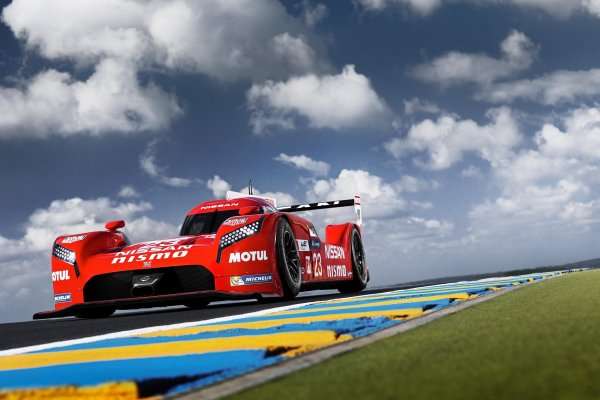 A week from today, the Le Mans 24 Hours begins and Nissan will be in the P1 category for the first time in decades. Their three entries are all an experimental design that comform to Le Mans rules. It's poised to be Nissan's big comeback to the grueling endurance scene at its topmost level. Or it could end in disaster.
Advertisement

Three cars, nine drivers, and 24 hours of continual racing. That will mark Nissan's return to the most grueling high-speed endurance race of them all, the Le Mans 24 Hours. Made famous to Americans by Steve McQueen in the film Le Mans, the race has long been an international stage for car of several classes to compete side-by-side in a venue where fuel economy, speed, and a driver's excellence all come together to make the winner.

Through its history, Le Mans has seen spectacular wrecks, fabulous comebacks, championship performances, and millisecond defeats. Nissan has competed in Le Mans since 1985 in various categories, with the number 23 being a common thread for many of the excellent racers put on the track. This year, Nissan will field three cars, all of the same radical front-engine design. The storied #23 entry will follow tradition and be piloted by drivers from three different disciplines in motorsport. Formula One star Max Chilton heads that team with GP3 racer and GT Academy winner Jann Mardenborough, the boy wonder being watched by everyone in the sport as the next up-and-comer, as his second. Frenchman Olivier Pla, sportscar supremo, rounds out that team for the #23.

The #22, piloted by Michael Krumm, the most experienced NISMO racer of them all, and LM P2 Le Mans winner Harry Tricknell, who was instrumental in early testing of the prototype now being raced. Nissan GT driver Alex Buncombe finishes out the set for the #22.

The #21 will be the showcase car for the race, and is the only one of the three already planned to be a one-race machine. Decked out in historic livery from the R90CK pole position car Nissan raced in the 1990 Le Mans 24 Hours, finishing fifth overall in the race itself. Despite being destined to become a museum piece, the #21's drivers have no plans on holding back. Lead by Super GT Chamnpion Tsugio Matsuda, also instrumental in the development of the new LM P1 NISMO car, the team also includes Super GT500 racer Lucas Ordonez and the first GT Academy Russia winner Mark Shulzhitskly. The three have worked closely together for some time and should prove well-oiled for this endurance spectacular.

For more information about the radical design of the Nissan GT-R LM NISMO, see this episode of Jay Leno's Garage where the showcar version appears and one of the racers above takes us out on a driver's-eye view run around the track in the car.

Now watch this promo video showcasing the return to Le Mans for Nissan and their short year of preparation for the big event.