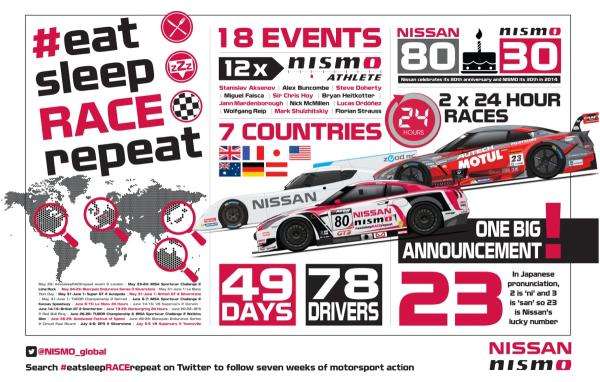 Nissan's factory tuning and racing arm is cranking it up for the racing season with competitors hitting nearly every major race event in the world. Join in and get pumped.
Advertisement

Nissan's performance arm, NISMO, is asking fans to join them in their #eatsleepRACErepeat summer of intense racing. Nissan's global motorsport program is involved in nearly every major race to happen this year and will be releasing a popular dance tune to the Eat, Sleep, Race and Repeat fan outreach this Friday.

NISMO says that over the next six weeks, they'll be turning up the heat to 11 with competition in the Monaco Grand Prix, the Indy 500, Silverstone.. and more. Many more.

"We want the fans to come with us on this white-knuckle ride through the summer via the hashtag #eatsleepRACErepeat," said Darren Cox, Global Head of Brand, Marketing & Sales, NISMO. "Tell us what stirs your soul about racing. Send us your photos, videos and opinions and we will spread your passion during this amazing period of motorsport."

"This campaign brings together all of our racing programs this summer," said NISMO President, Shoichi Miyatani. "We are a global company and now fans across the world can stay on track with us via #eatsleepRACErepeat."

The race schedule for the campaign begins this weekend at Blancpain at Silverstone, where several gamers-turned-racers will be competing in one of the world's most intense endurance races. A week after that, Le Mans Test Day begins in the UK and simultaneously, the Super GT teams will be in Japan. Then there's Le Mans 24 Hours, the Nurburgring 24 Hours, V8 Supercars in Darwin, and the Goodwood Festival of Speed. Plus more.