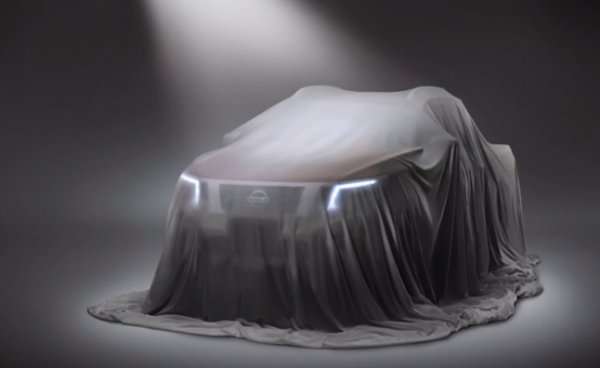 Nissan released a teaser image for a new Navara pickup truck and we think it's the next-generation Frontier, which is likely to show up as a 2016 redesign alongside the new Titan.
Advertisement

Nissan has released a teaser image and video of the "next Navara" pickup truck. The Navara is the name the Frontier is given in the South American and Asian markets. The Frontier, and its Navara twin, haven't had a serious update since 2005. When I test-drove the 2014 Frontier Pro-4X a couple of weeks ago as a press loan, it was nearly identical to the 2013 model which itself had been largely identical to the 2012.

So, to quote a Nissan representative when I asked about the Frontier and the company's plans for its next-generation, "the Frontier is long in the tooth." Given that the midsize pickup truck market in the U.S. has consisted of only two options - the Toyota Tacoma or the Nissan Frontier - there has been little attention paid to the little truck. We were recently told in another conversation with Nissan, after mentioning the Colorado re-entering the market, that Nissan was already over a year into work on a new Frontier and Titan. Toyota, rumor has it, is scrambling to re-do the Tacoma as well thanks to the new GM threat.

Great things are expected of the new Titan, which will debut in Detroit at the auto show in January. With Fred Diaz, former Ram truck honcho now heading up things at Nissan (not to mention the big V8 Cummins bombshell dropped last winter), it's hard to imagine Nissan not rocketing forward with their truck offerings. The Frontier Diesel Runner was a crowd favorite when it unveiled as a "reaction test" for consumers in Chicago..

Putting two and two together to get four plus change, we can make some guesses about what's going to happen. The 2015 Navara being shown under wraps in the video below is not likely to be fundamentally changed from the 2014 or 2013. We can see enough of the grille to note that it doesn't appear to be much different.

But, with the unveiling of the new Titan early next year, we can expect that a Frontier will come soon after - probably in Chicago or New York, also as a 2016 model. So this time next year, we may be looking at a brand new pickup truck lineup from Nissan. Hopefully with a diesel option not just for the Titan, but also for the Frontier.

Mark underwood wrote on June 21, 2014 - 7:16am Permalink
"Toyota, rumor has it, is scrambling to re-do the Tacoma as well thanks to the new GM threat". To me, this means that there will be numerous recalls happening after Toyota introduces the redesigned Tacoma. The modern Toyota corporation tends to screw up it's new models BIG TIME! I'd never consider buying a redesigned Toyota "ANYTHING" for 2-3 years after the new model is introduced.