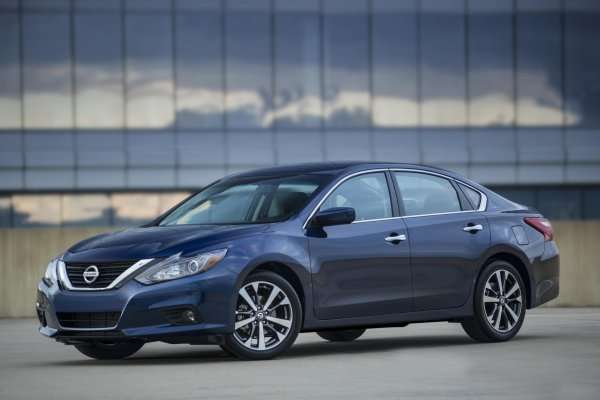 A more than significant refresh was given to the 2016 Altima, introduced this week by Nissan CEO Carlos Ghosn in New York and then detailed at an same-day event in Detroit. We have details on the car plus a showroom date.
Advertisement

The new 2016 Nissan Altima marks a very significant refresh for the Nissan brand's best-selling car. The car was rolled out in style, with Nissan's big guy himself showing it to media in New York before a same-day event started in Detroit to showcase the new car to the automotive press. As usual, Ghosn was blunt:

"Altima has experienced five consecutive years of sales growth, the only vehicle in the mid-size sedan segment to do so, with sales growing more than 60 percent since the start of the economic recovery in 2009," said Ghosn. "With this new, redesigned 2016 Altima, we expect to be more competitive in the marketplace."

Redesigned for 2016, Nissan keeps its aggressive stance, holding the Altima as a trend-setter in the segment. A segment that is growing very quickly with some of the most competitive offerings automakers have on the lot. Although this update is a "midcycle refresh" rather than a full revamp of the car, it's very much a significant change for the Altima and is nearing the line for a full remodel.

The 2016 Nissan Altima enters showrooms in November with seven model choices that include two engine options, an almost completely redesigned exterior, a 10 percent boost in fuel economy, and an almost all-new interior as well.

The engines offered are the staid 2.5-liter four-cylinder that produces 182 horsepower and the well-known 3.5-liter V6 that boasts 270 horsepower. The four-cylinder offers best-in-class fuel economy at 39 miles per gallon highway.

Details on the Altima's Upgrades
The exterior of the 2016 Nissan Altima is the most obvious change for this new car. The bumper, fascia, fenders, hood and lights are all new. The new V-motion grille look, boomerang headlamps, and faster-paced fascia overall are all following the design language in the all-new Murano and totally-redone Maxima.

A new bumper at the rear and a new deck lid with an integrated spoiler are also new on the 2016 Altima. Lower, wider boomerang-shaped rear tail lamp four-way combination set are significant upgrades. A new Deep Blue Pearl color is added to the other colors in the lineup. Two new alloy wheel designs also enter the fray.

Inside, a new design also from the Murano as well as the Rogue comes to the Altima, lifting the dashboard and expanding interior space for the occupants. Both 5- and 7-inch displays for NissanConnect infotainment are available in the new Altima. Zero Gravity seating up front continues to be standard,but with a new "open weave pattern" design for a more premium look and feel. Even the cup holders in the new 2016 Altima are changed, responding to customer input.

Finally, the biggest change, is fuel economy. This came entirely from aerodynamic upgrades with the 2016 Nissan Altima seeing a ten percent increase in highway efficiency. The coefficient of drag was reduced to 0.26 (from 0.29) thanks to an active grille shutter, underfloor aero cover additions, and the new front and rear fascia designs.

"As the best-selling vehicle in the Nissan lineup, it's important that Altima exemplifies 'Nissan-ness' inside and out," said Executive Design Director Mamoru Aoki. "With its fresh new look, aggressive SR model and strong connection to our all-new Murano and Maxima, the new Altima continues to stand out in a very competitive marketplace."