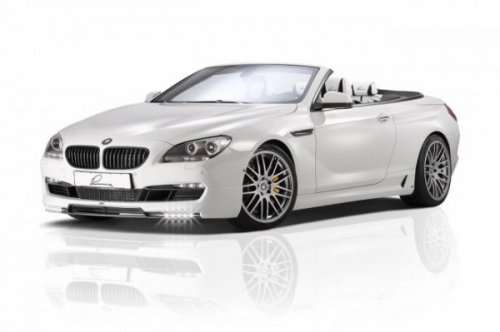 The car, based on the 2012 BMW 650i Cabriolet, is designated the CLR 600 GT F12 and includes some impressive bling from the famous German tuner.
Advertisement

Lumma Design is one of the best known German tuners of luxury and sports cars, specializing in BMW and Porsche vehicles. They recently showed a car similar to this one, the 2011 F12 model, based on the BMW 6-series Cabriolet E64. Some of the highlights of that upfit appear on this latest reveal, most notably in the engine compartment.

The new CLR 600 GT is based on the 2012 BMW 650i Cabriolet with the 4.4-litet twin-turbo V8. Like the E64 before it, this engine received a boost to 490 horsepower (from its factory 407hp), which in turn upped the torque to 720Nm (or 531 lb-ft) from the original 600Nm. Most of this is through a reprogramming of the control unit and additional air intake enhancements and a flow-optimized sport exhaust system.

The rest of the tuning is all bling. Body kit changes are noticeable immediately. The front fascia sees new LED light rows added as daytime running lamps in the fog lamp couches. The side skirts have been replaced with a more sleek pair which have a slight opening at the rear wells to dampen road noise. A rear diffuser finishes the alterations, bringing slightly sleeker lines to the car's flow.

Of course, you can't ignore the suspension on a sporty ride like the 650i, so Lumma added a lowering suspension that condenses the ride height by 20mm and augmented that with a set of 20-inch GTB-Monoblock wheels through which the painted calipers can be seen flickering between the spokes.

The interior got a complete overhaul of upholstery, mixing alcantara and leather. A new steering wheel was added, replacing the stock wheel with something more aggressive. Aluminum pedal covers and Lumma floor mats finish off the upfit. Overall, a more dramatic look for the driver and passengers of this beautiful coupe.

The new design tuning will be showcased at the Geneva Motor Show next month where Lumma Design will be launching the new model.