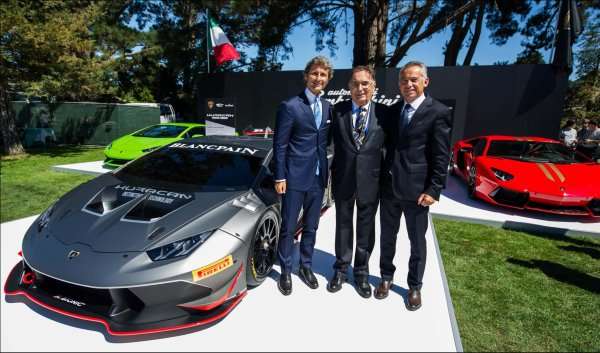 The latest in Lambo's stable of race machines is the Huracan LP 620-2 Super Trofeo for Blancpain Super Trofeo. And it's a serious monster.
Advertisement

Automobili Lamborghini used the motorsports gathering called The Quail to unveil its latest Super Trofeo car for the Blancpain series. The new Huracan LP 620-2 Super Trofeo will be the car used in the 2015 Blancpain Super Trofeo series and marks a powerful benchmark for the race.

"The Huracán Super Trofeo is an all-new car built from scratch with a clear racing concept," said Maurizio Reggiani, Board Member and Director of Research and Development for Automobili Lamborghini. "We believe the car will be as fun for fans to watch as it will be rewarding for our racers to drive."

The Huracan Super Trofeo was redesigned from the 2014 car in collaboration with Dallara Engineering. Giampaolo Dallara had a direct hand in this work and is known for his Lamborghini tuning starting back from 1963 when he worked for Lambo as an engineer, eventually developing the now-legendary Miura.

The V10 from the road-going Huracan is used in this Super Trofeo rendition, but with race trim and tuning, it produces 620 horsepower in a rear-drive setup. Lamborghini's Blancpain Super Trofeo series is considered a stepping stone to GT racing, so the 2015 Huracan 620-2 was made with that in mind.

Lightweighting has dropped the car down to a slim 2,800 pounds, mostly thanks to the hybrid carbon-aluminum chassis. This gives the new Super Trofeo a weight to power ratio of just 4.5 pounds per horsepower.

This light car with all that muscle is kept on the track by the judicious use of aerodynamics to create both improved traction and better downforce at varying race speeds. The ten-position rear wing, diffusers at front and rear, and adjustable front air intakes aid these goals. Exclusive Pirelli tires cap the wheels.

The 2015 Lamborghini Huracan 620-2 Super Trofeo will be used in the 2015 season's Blancpain Super Trofeo series.