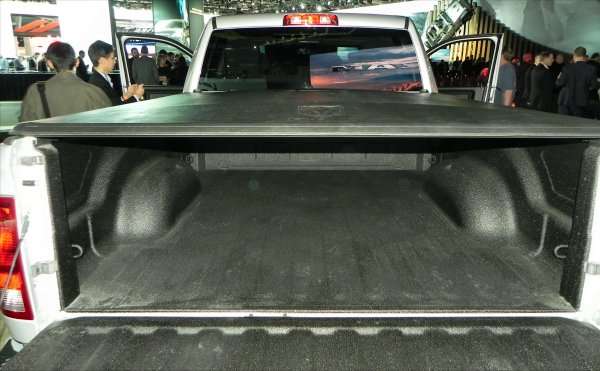 During the Ram Truck press unveil at the Detroit show, I snapped a photo of Bob Hegbloom, President and CEO of Ram Truck, with a "29 MPG" backdrop as he quickly announced the HFE's mile per gallon gain before moving on to the exciting Rebel unveil. The relatively boring news of that one MPG gain was trumped by the "holy crap that's bad buttocks." No fault there, the Rebel is what its name implies.

The more mundane news, though, was intriguing and as the crowd amassed around that big red truck after the unveiling, I instead headed for the plain-by-comparison silver truck situated off-stage and began looking it over. I could see some differences in aerodynamics, but not enough to see that kind of efficiency gain on the highway. So I found Nick Cappa, the go-to guy at Ram for all things truck, and asked him how they did it. "It's all aerodynamics," he confirmed. Changes to the front fascia, air dams, and the tonneau cover were the key. That last bit threw me off because the debate over how much a bed cover improves aerodynamics has raged for some time. Almost as long as the "tailgate versus net" debate has. With this quick explanation, I headed back over to the truck.

Digging around, I noted and snapped photos of the expanded air dam underneath the front end, the lower and smoother front fascia, and, of course, that bed cover. Around the corner from the 1500 EcoDiesel HFE was a standard EcoDiesel wrapped to showcase its Green Truck of the Year status. I made comparisons.

The improvements to the Ram 1500 EcoDiesel HFE to achieve that 1 mpg were small individually, but build up incrementally. Most notably, though, astute observers will see that the tonneau cover used has a distinct arch to it. That arch runs side-to-side, as the above photo illustrates), but also front-to-back. It starts at the front of the bed and runs back to the back edge of the tailgate cap. Along the sides, it smoothly covers the side caps. The "spoiler" in the tailgate is the same as it is on the other Ram 1500s in the lineup, but is accentuated by the cover and appears to make a slightly larger vortex because of that.

So taken on the whole, the tonneau is likely accounting for over half of the mile per gallon gain while the front fascia and dams do the rest. It's compelling because not only are these changes that can be made to almost any pickup truck on the market, but they can be done after market just as easily. As I said to Cappa, "in about thirty seconds, that tonneau will be online as an aftermarket from someone." He chuckled.

For efficiency nerds, a mile per gallon gain is big news for a pickup truck. At 29 mpg, the 2015 Ram 1500 EcoDiesel HFE is nearing the magic 30 mpg mark for full-sized trucks. And it does it without losing any of the capabilities of the already-impressive 1500 EcoDiesel. Nicely played, Ram.

Parks McCants wrote on January 15, 2015 - 7:32pm Permalink
Nothing new here Bro. I recorded 22 mpg highway consistently driving a heavy 3/4 ton(8800 GVW) Dodge 2500 Cummings Turbo D. NO OVERDRIVE, 5 SPEED MANUAL TRANSMISSION. I increased the mileage by changing rim & tire size, installing running boards, hood damn, window and headlight wind deflectors. I further increased fuel efficiency by changing out the factory filter box and increasing the exhaust pipe to 4 inches. And that was in 1997...
Aaron Turpen wrote on January 16, 2015 - 11:51am Permalink
Ahh, but did you achieve an EPA RATING for it? :P
ricky siler wrote on July 19, 2015 - 9:14pm Permalink
Your right on point brother. I have a 3/4 dodge and i get 21 with 35in tires.