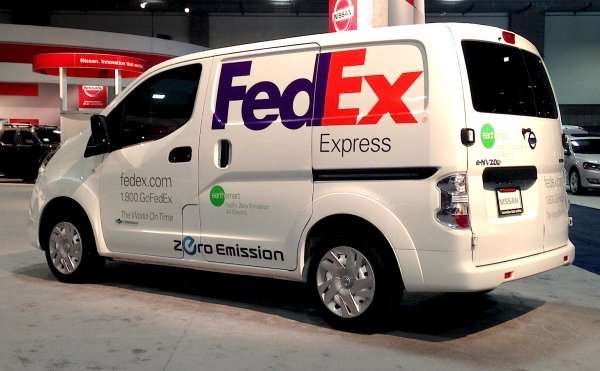 The electric powertrain of the Nissan LEAF is available as an option for the e-NV200 small cargo van and at the Washington Auto Show this week, FedEx has announced that they will be testing some of those electric vans in real world conditions in Washington, D.C.
Advertisement

FedEx Express, a part of FedEx, and Nissan were at the Washington, D.C. Auto Show with a new delivery van to show off. The van is part of a collaboration between the two companies to test a 100 percent electric compact cargo van under real-world conditions in the Washington, D.C. area.

The van is an e-NV200, an NV200 cargo van outfitted with an electric powertrain taken from the Nissan LEAF. Similar testing of the e-NV200 has been taking place in Japan, Singapore, the United Kingdom and Brazil as well.

Rotating the e-NV200 into their delivery fleet is part of the FedEx EarthSmart program, a sustainabiility platform designed to guide the company's global environmental commitment. It's also part of Nissan's "Blue Citizenship" corporate social responsibility program, which focuses on increasing the number of zero greenhouse gas emitting vehicles in their lineup of offerings by exploring vehicle segments where its leading Nissan LEAF technology can be applied.

The e-NV200 will be deployed in Washington, D.C. and surrounds in field tests that subject it to the routine requirements of a FedEx Express delivery vehicle. The results will be used to determine how viable an EV is in that role in the United States.

In other markets, the tests have proven promising and Nissan plans to being mass production of the e-NV200 in Europe later this year.

"We're eager to work with FedEx and other companies to put the e-NV200 through its paces to continue to build awareness of the capability of electric vehicles and to evaluate how well it meets the needs of the commercial consumer," said Erik Gottfried, Nissan director of Electric Vehicle Sales and Marketing. "We'd also like to explore clever uses of EVs in work environments where carbon emissions of gas-powered vehicles make them impractical or impossible to use."

This will make the e-NV200 the second global all-electric vehicle for Nissan, next to the best-selling LEAF. The gas-powered version of the NV200 emits about 140g of CO2/km versus the zero GHG emitted by the e-NV200 at the tailpipe. The van requires less than thirty minutes to charge to 80 percent from a fast charger. Battery placement means that the load floor remains low and cargo space is not compromised versus its gasoline brethren.

It joins 167 other electric vehicles in FedEx's global fleet, which also contains 365 hybrid electric vehicles. By the end of this year, FedEx will have increased those numbers to 222 and 393 respectively. FedEx is targeting a 30 percent fuel reduction, fleet-wide, globally, by 2020.