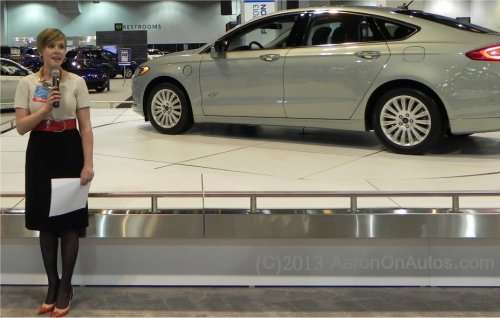 Kendra Clayton of Ford talks us through the highlights of the all-new 2013 Ford Fusion, including its five powertrain options and safety features, at the 2013 Denver Auto Show in Colorado.
Advertisement

Ford hit the 2013 Denver Auto Show in a big way, showcasing a lot of great vehicles and prototypes for the 2014 model year. The showcase of Ford's floor space, though, is the all-new 2013 Fusion. We caught up with the lively Kendra Clayton, the Denver Region Zone Manager for Ford, who gave us the run down on the host of options the Fusion has.

The 2013 Ford Fusion is the flagship for the company's lineup of cars. With seven models and five powertrain options, it's beautiful new styling is eclipsed only by its wide range of choice. On the show floor, visitors will see a Fusion EcoBoost, Hybrid, and Energi. These three are the fuel efficiency options ranging from the high-efficiency gasoline EcoBoost models to the class-leading Hybrid (47 mpg across the board) to the plug-in hybrid Energi (over 100 MPGe, learn about it hands-on here). The sporty 2.5-liter Duratec is also a popular power plant in the Fusion, for those who prefer more get-up in their go. All are mated to a 6-speed transmission (automatic or manual) or an optional electronic continuously variable transmission (eCVT, standard on Hybrid and Energi models).

Talking with Kendra, we learned more about the safety features in the Fusion - which happens to be her daily driver. She enjoys the safety features of the new Fusion, especially the Active Park Assist. "That will actually parallel park the car itself," she says. "All you need to do is keep your foot on the brake, let go of the wheel, and the car will parallel park itself. Which is great because they didn't teach me how to do that in Driver's Ed." These active safety features work in conjunction with the award-winning passive safety built into the 2013 Fusion.

Other new features include the improved Infotainment in this generation of Ford's interactive electronics, including optional keyless entry and access. Overall, Ford aimed to place the 2013 Fusion firmly into the mid-sized sedan sub-luxury class with options to put it up into the entry-level luxury segment in a more inclusive marketing strategy. The top trim, the Fusion Titanium, is equipment-equivalent to most luxury vehicles in that segment while the Fusion's lower trim levels are price-competitive with vehicles like the Toyota Camry and Chevrolet Malibu.

Where the 2013 Fusion sets itself apart from the competition, however, is in its styling. The Fusion is (deservedly) often called the "Aston Martin of family sedans." It has a definite Aston-esque look and was engineered largely in Germany, though the North American version is built in Detroit. The car is one of Ford's global models, being sold just about everywhere, so input on its design came from Ford engineers everywhere. That close collaboration shows as the 2013 Fusion sports definite European styling, German handling, and American interior refinements. It's a great blend of some of the world's best automotive.

Here is Kendra talking about the new 2013 Fusion as the 2013 Fusion Energi showcases on the stand behind her at the 2013 Denver Auto Show: