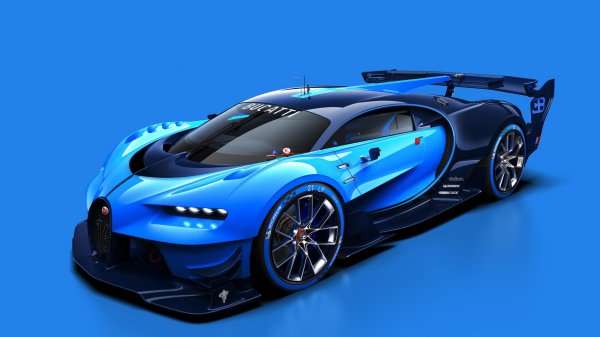 Bugatti has unveiled its first-ever digital car for the PlayStation Gran Turismo game. The Vision Gran Turismo will unveil in person and on-screen at the upcoming Frankfurt auto show.
Advertisement

The International Motor Show (IAA) in Frankfurt will have many unveiling and no doubt a lot of supercar awesomeness on the floor. When the name "Bugatti" is given as a showcase, though, people tend to perk up. In this case, the unveiling will be for a digitized car designed specifically for the Gran Turismo racing game franchise on PlayStation.

“The Bugatti design team normally works only for the exclusive and very distinguished circle of the brand’s customers. Now Bugatti Vision Gran Turismo has given us the opportunity, for the first time, to do something special for our fans as well,” explained Achim Anscheidt, the head of Bugatti Design. “When the target group suddenly grows from 450 Veyron owners to several million fans, gamers and high performance aficionados, it is a very exciting matter. We had a lot of fun with this project.”

Inspiration for the Bugatti Vision Gran Turismo came from the brand's rich racing tradition, in which the Bugatti cars were the ones to beat in the 1920s and 1930s. The victory in the 24 Hours of Le Mans in 1937 and 1939 by the Bugatti Type 57 Tank was the specific impetus for the new PlayStation rendering. Including its classic two-tone blue finish.

“Under no circumstances did we want to create a retro-style race car in memory of the successes in Le Mans, but rather to transfer the feeling and mood of these special moments in Bugatti’s history to a modern vehicle,” said Sasha Selipanov, the Head of Exterior Design Creative Development. “As an acknowledged Gran Turismo fan, it is a great adventure for me to bring a brand which was once so successful in racing back to the virtual track.”

Two things were important to the design team: First, the virtual car should look unmistakably like a Bugatti and completely embody the brand values of ‘Art, Forme, Technique’, and second, every part of the vehicle should have a real function. Consequently, the virtual race car was developed in close cooperation with the Bugatti engineers and is based on cutting-edge racing technology and precise aerodynamic analyses.

The Vision Gran Turismo is unmistakably a Bugatti, from its upper fin "Bugatti line" and the horseshoe on the hood, the characteristics of the car, though virtual, are definitely from Bugatti.

“We wanted to develop a virtual race car for our fans which is a genuine Bugatti down to the last detail and radiates the unrestricted values of the brand,” the designers said. “We hope that the gamers will have just as much fun racing the car as we did in developing it.”

LG's New EV Battery Plant Is a Welcome News for Tesla
Tesla Giga Berlin's New Hurdle: It's Not Only the Gov't, but Now Tesla Itself
END_OF_DOCUMENT_TOKEN_TO_BE_REPLACED