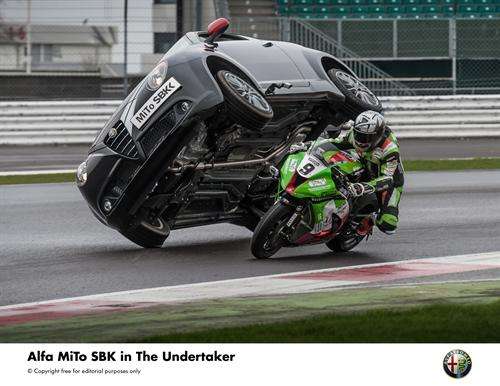 The new Alfa Romeo MiTo Quadifoglio Verde SBK Limited Edition was designed in collaboration with the FIM World Superbike Championship and to mark the new model's arrival in the United Kingdom, an awesome stunt called "undertaking" was performed with the car on the Silverstone circuit.
Advertisement

The photo says it all. To stage the limited edition import to the United Kingdom of this new car from Alfa Romeo, precision driver Paul Swift got into the new MiTo Quadrifoglio Verde SBK and British Superbike rider Chris The Stalker Walker jumped on a Kawasaki ZX-10R Ninja and the two coordinated an "undertaking" maneuver, as shown.

This extreme "don't try this at home" move is one of those awesome things that you'll only rarely see done, even on film or at stunt shows, and is the perfect way to showcase this car that will only see 28 units sold in the UK. The event took place on the Silverstone circuit. On the Brooklands corner, Swift cornered and lifted the car onto two wheels at which point the trailing motorcycle was given throttle by The Stalker, who pulled underneath the tilted car on the inside corner and sped ahead. You can see this in the video below.

The exclusive MiTo Quadrifoglio Verde SBK Limited Edition was designed in collaboration with the FIM World Superbike Championship - hence the tie-in for the stunt - and is being marketed in collaboration with the racing circuit's new season. The MiTo SBK was first revealed at the Paris Motor Show in 2012 to showcase Alfa Romeo's passion for style and elegance combined with the excitement and competition of FIM Superbike racing. Alfa has been a sponsor of WSBK for seven years and provides the official safety car to the championship.

The MiTo Quadrifoglio Verde SBK Limited Edition features a 1.4-liter Turbo MultiAir 170 bhp Quadrifoglio Verde engine while the car itself is festooned with a race-specific paint scheme and SBK decals. The racing body kit includes side skirts and a rear lower spoiler added to the MiTo's compact build. The Limited Edition can be purchased in either solid black or with a red rooftop, sure to be popular in Britain.

Inside the cabin, the motorport theme continues with red stitched Sabelt Alcantara sport seats with carbon fiber backs, sport pedals, and matching red-stitched leather steering and gearstick. Each vehicle has a number badged below the black carbon fiber-look dash. The exclusive edition, in its highly limited numbers, will be sold at £21,595.

Nicolas Zart wrote on February 3, 2013 - 8:29pm Permalink
That MiTo Verde would be a perfect addition next to my Milano Verde. Of course, if it was electric, it would be even better but I'm not holding my breath.

Tesla Contemplates A New Strategy for China Retail even As Sales Boom
Jay Leno on Elon Musk & EVs: “I Think He Should Get ... Credit"
END_OF_DOCUMENT_TOKEN_TO_BE_REPLACED