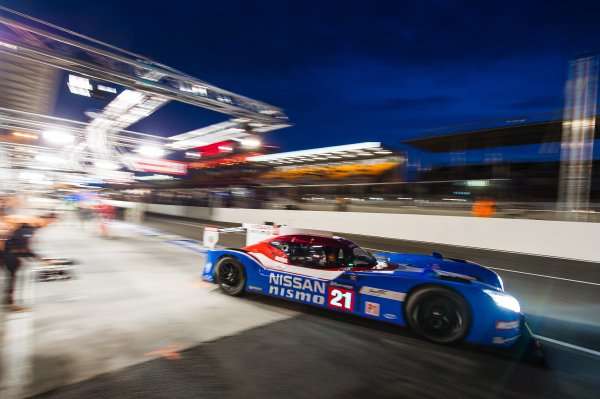 The 24 Hours of Le Mans Begins Tomorrow. Is Nissan Ready?

The NISMO team has been in France all week during practice sessions and qualifying. Are the drivers and is the Nissan GT-R LM NISMO ready for the big day? Plus a bonus spotter's guide!
Advertisement

Practice sessions for Le Mans 24 Hours, the most grueling and respected of motorsport events, began on Wednesday this week. Day, afternoon, and night runs were made by all of the drivers in the race, including the nine from the NISMO team from Nissan. Qualifying laps commenced with three sessions, starting on Wednesday afternoon and with another two on Thursday.

While Porsche dominated the qualifying runs with a record-setting lap, Nissan wasn't as spectacular. They did well for a first-time entry vehicle, though, on an experimental platform that even the driver's are not terribly familiar with. All three NISMO LMP1 racers were penalized for failing to meet 110 percent LMP1 times, returning 3m, 37s times with the exception of one, piloted by Ordonez/Matsuda/Shulzitsky which returned a 3m, 40s time. The NISMO team qualified at the middle of the pack, but at the end of the LMP1 class, for positions 30-32 on the docket.

Yet the team felt good about their practice session Wednesday, according to video released by Nissan that afternoon, but acknowledged that they were behind their competition.

With their qualifiers putting them behind all of the other LMP1 class cars in Le Mans and behind all of the LMP2 cars as well, it'll be interesting to see how the team works to make up for this. They're struggling, for sure, and will have to see some better-than-stellar performances from both drivers and machines in order to make a comeback.

That may or may not be possible, with video of lap runs showing that the primary drawback of the GT-R LM NISMO's front-engine design being slower corners. This could be remedied with some driver finesse, but is likely the primary roadblock that the NISMO team will have to address and overcome if they're going to make a solid showing at Le Mans.

The up side to Nissan's struggle at their return to Le Mans after a long absence is that they're being forthcoming about them. Nissan's strategy has been to engage social media through heavy marketing towards bloggers and race fans. The result is that they've also had to be a lot more open and honest about their problems than many of the other teams have been, which may endear them as the underdog in many people's minds.

So even if the results of tomorrow's race are disappointing, so long as the drivers give their all and the team continues its open approach, Nissan will come out as a winner regardless. Nissan is hosting live coverage of the Le Mans 24 Hours on NISMO.TV starting tomorrow.

NISMO has also provided a handy spotter's guide for the 2015 24 Hours of Le Mans so you can spot the cars and drivers on the track and identify them easily. Grab it in PDF format at this link.

Tesla Contemplates A New Strategy for China Retail even As Sales Boom
Jay Leno on Elon Musk & EVs: “I Think He Should Get ... Credit"
END_OF_DOCUMENT_TOKEN_TO_BE_REPLACED