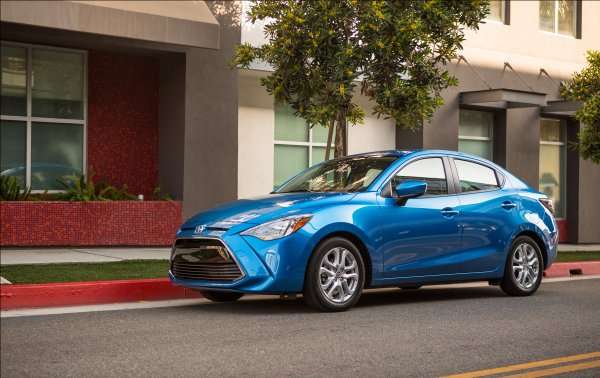 The 2016 Scion iA Is a Game-changing New Subcompact

Our first impression ride-and-drive of the new 2016 iA, courtesy of Scion, was surprisingly positive with the car providing a powerful showcase of where the subcompact market must go if it’s to keep growing.
Advertisement

The Scion brand is now twelve years old and continues on its goal of reaching the elusive 18-34 year old buyer. One of their strategies for targeting that ever-changing audience is with two new subcompact vehicles, the Scion iM and iA. The 2016 Scion iA is a first for the brand on several levels. It’s their first sedan, their first collaboration with Mazda, and it’s the most premium vehicle Scion has ever offered.

Currently, the subcompact sedan market as a whole accounts for about 250,000 vehicles annually. About 75 percent of those buyers are first-time new car buyers. A significant portion of that market, Scion’s Group Vice President Doug Murtha says, is urban, independently minded, and upwardly mobile. This is the specific target for the Scion iA. We feel they’re hitting it very well with this car. These are our impressions of the vehicle, after a first drive through the hills and along the seaboard in the San Francisco Bay Area of California, courtesy of Scion.

Exterior and Interior of the 2016 iA
Our first impression of the iA was on the curb of a busy street in downtown San Francisco right in the heart of the Market District. It doesn’t get more urban than this with street musicians blending their sound with car horns and the cries of street preachers announcing impending doom. The occasional sirens from the San Fran Fire Department punctuate as the beautifully-designed little Scion iA takes it all in.

The 2016 Scion iA is a blunt-nosed sedan with rolling body lines and notched pillars. Wheels pushed towards the corners and an aggressively wide grille speak to the car’s intended performance. The clipped trunk gives a nearly fastback appearance to finish off the fast-paced look of the iA. Yes, those 16-inch alloy wheels you see in the photo are standard equipment.

Inside, the 2016 iA is surprisingly upscale. Minimalism and flowing design come together to mark the first impression of the iA’s interior. Soft touch materials are, surprisingly, found throughout. Few hard plastics mar that first impression after a longer look. The cabin flows well with excellent upholstery and good driver and front passenger ergonomics. The rear seats are cramped for all but occasional use or use by kids in safety seats, but the trunk is poised to be one of the largest in this class at 13.49 cubic feet. The rear seats are a 60/40 split-fold.

Standard equipment is amazingly advanced for the iA’s segment and price point. A 7-inch touchscreen, Bluetooth with voice recognition, remote keyless entry, push-button start, and a backup camera are all there. The most surprising items, though, are the active low-speed, pre-collision system and the secondary collision reduction systems that are also standard equipment on the iA.

Under the 2016 Scion iA’s Hood
Powering the 2016 iA is a 1.5-liter inline four-cylinder engine that produces 106 horsepower and 103 pound-feet of torque. This might seem weak, but given the car’s curb weight of only about 2,400 pounds, that’s plenty. Add in the aggressive gearing found in the six-speed manual (or optional six-speed automatic) and the amazing lack of understeer the iA has, however, and you have a far sportier car than expected.

The EPA has rated the 2016 Scion iA at 31 mpg in the city, 41 mpg on the highway, and 35 mpg combined with the manual transmission. The automatic delivers a slightly better 33/42 city/highway (37 mpg combined). We did not have a chance to put these numbers to the test in the real world, given our relatively short time in the car (about 2 hours all told).

On the Road in the Manual and Automatic
We spent more time in the manual transmission version of the 2016 Scion iA than we did the automatic, with over an hour in the first and just over half an hour in the latter. Both were through the urban environs of San Francisco and the twisting highways of the rolling hills and side roads of the Bay Area.

The sport bucket seats of the iA are well-tailored and offer good support and comfort, though hard sport driving will prove the bolsters inadequate for Speed Racer types. In everyday driving, though, the Scion iA is a comfortable, well-mannered little car that is equally at home rushing from one stop light to the next as it is twisting through the seaboard roads of the coast.

The short throw and forgiving clutch of the manual transmission are excellent and provide fuss-free fun for the driver. Self-preservation programming in the transmission keeps it from going past the red line, so the occasional bout of inattentiveness won’t harm the car.

Most of the chassis and powertrain design for the 2016 Scion iA are from Mazda, which builds the car in its new assembly plant in Mexico. This includes the surprise of a torsion beam rear suspension that has been “sport-tuned” to provide a stiffer rear end balance. This seems counter-intuitive to those familiar with vehicle design dynamics, but those familiar with Mazda’s SKYACTIV system and the similar stiffening system used in some of their hatchbacks will know that when done right, it works. In this case, it’s responsible for a lot of the car’s positive steering as it minimizes the “sliding weight” of the rear end in the turn. This may be, of all the 2016 iA’s attributes, the most significant and surprising to first-time drivers of the car.

Pricing and New Standards Set By the Scion iA
Knowing all of this about the new little Scion iA, it’s easy to overestimate the entry point for this car. Scion has a one-size fits all pricing strategy that includes no trim levels and only a very few dealer add-ons. The company made its name with its no-haggle, simple price structure and is expanding that with online ordering capability through select dealerships. This will, in many cases, include hand delivery of the car to the customer, making it possible to buy a new Scion without once seeing the dealership.

When the 2016 Scion iA enters dealers in September, pricing will start at $15,700 with the manual transmission and at $16,800 with the automatic. Scion expects to sell about 30,000 units in the 2016 model year. Given the very low price point, high amount of standard equipment, and the sophisticated look of the Scion iA - not to mention its excellent driving dynamics - we expect it will easily exceed that sales mark. This is by far the best entry-level subcompact sedan we’ve driven to date.

Parks McCants wrote on July 1, 2015 - 8:29pm Permalink
Reads like a winner. Still, I'm a bit surprised by the engine power output. While it's small, it's not that small. None the less, an informative read!
Aaron Turpen wrote on July 2, 2015 - 11:12am Permalink
It's a lot peppier than the numbers would make it out to be. Remember: it's a Mazda powertrain, not a Toyota, so things are a lot more sport-themed.

Tesla-Funded Research Reveals One of The Biggest Mysteries of EV Battery
Tesla Tesla Buyer Nets a Whopping $12,000 Discount After Asking for Reduction
END_OF_DOCUMENT_TOKEN_TO_BE_REPLACED