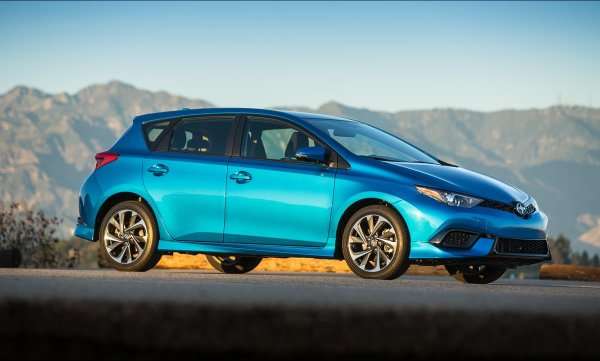 The 2016 Scion iM Redefines Hatchback for the Brand

We took a first impression ride-and-drive of the all-new 2016 iM, which will become Scion’s new flagship subcompact. Although this is a car that may have to grow on some buyers, it is likely to do well in the long run.
Advertisement

The primary selling point of the 2016 Scion iM is not a sporty nature or stirring good looks. It’s primarily the car’s high value proposition in comparison to others in its class. The iM is a subcompact five-door with a roomy front seat, large cargo space, and versatile build. Styling cues for the car come from the small car lineup at Toyota, with a front end and body shaping akin to the Toyota Yaris and Corolla. The underpinnings are drawn from those cars as well.

Speaking with Scion Group Vice President Doug Murtha, we learn that this is the vehicle that will replace the xB as the top-level hatchback for the brand. Scion feels a market change is happening and the mindset of the sub-30 aged buyer is now more pragmatic and less flashy than it was before. Aiming for that 18-34 year-old buyer, Scion feels they have to change their focus to hit that target.

The subcompact five-door market has about 500,000 units sold per year with about half of those buyers being first-time new car buyers. Scion hopes to hit about 25,000 of those for the 2016 model year and may be able to do that given the high value of the iM’s offering.

Exterior and Interior Styling for the 2016 Scion iM
On the outside, the 2016 iM is part Yaris and part Corolla with a splash of something new. The grille and hood line are almost carbon copies of the Yaris when looked at as a whole, though some nuances can be noted on closer inspection. The angle of the lighting, the grille opening, and the rake of the windscreen off the hood bulge are all slightly sharper in comparison. The bodywork is very similar to the Corolla, as is the roofline. The rear hatch is akin to the Yaris, but only generally speaking, with the iM having a more rounded hatch bulge and simpler spoiler above.

On the inside, the iM is much more upscale than expected. Although the cabin design is different in terms of flow and appeal, it’s very similar in workmanship and high-quality materials as the new Scion iA sedan. Elements from the Corolla are noted with the overall dashboard design being very similar. Given that the interior is one of the Corolla’s strong points, that’s a good homage to have.

Seating is comfortable and roomy up front with plenty of leg and headroom to spare, despite the iM’s small size. The dashboard’s uplifted design helps with this. The rear seats are small, however, and suitable mainly for children or occasional adult use. Emphasis with the Scion iM is in the rear cargo area instead, which is huge for this small hatch’s design at 20.8 cubic feet. It’s readily accessible as well, with a squared opening and split-fold rear seats to expand it quickly.

Powertrain In the 2016 Scion iM
The 2016 iM’s powertrain will be familiar to Toyota Corolla fans. The 1.8-liter inline four-cylinder engine and continuously variable transmission with Sport Sequential Shiftmatic Mode (CVTi-S) is almost entirely unchanged. A six-speed manual transmission is the base offering and it will likely be preferable for those who prefer more dynamic to their drive.

The EPA rates the CVT at 28 mpg in the city, 37 mpg on the highway, and 32 mpg combined. The manual transmission receives an EPA rating of 27/36 mpg with 31 combined. We could not test these numbers given the limited time we had behind the wheel (about 45 minutes) in the iM.

On the Road in the 2016 Scion iM
Although our road time was limited, we did split it between the manual and automatic versions of the iM. We found the manual transmission to be enjoyable, though not groundbreaking. The CVT was decent enough in city and traffic situations, but was otherwise lackluster and often loud when on the highway or while being pressed around corners or up hills.

Compared to the quick little Scion iA we also tested during this trip to San Francisco, we found the Scion iM to be far less engaging. Steering was precise and well-mannered, but the overall road dynamic was front-heavy and apathetic.

The intended buyer for the Scion iM is not likely as interested in road hugging or acceleration, however, having more pressing concerns. Versatility and usability are the primary points of this car beyond its low cost of entry and value delivery.

Pricing for the Scion iM is $18,460 for the manual transmission and $19,200 for the CVTi-S-equipped model. Scion does not have trim points with only a handful of dealer-installed options being available for the iM beyond its base fittings.

Wondering how much bang that is for the buck, we did a shopper’s comparison of some competing vehicles in the subcompact hatchback segment. When comparably equipped, most of the competition is priced higher than is the Scion iM with one exception, the Nissan Versa Note. The top-most package for the Versa Note rings in at $18,660 (SL trim). We point this out as the Versa Note is the segment leader with which the Scion iM must compete.

Even with that, however, we give credit to Scion for the high value offering that is the new 2016 iM. It’s a versatile, practical little car whose strengths are in its build quality, interior experience, and solid fuel economy.

Tesla Contemplates A New Strategy for China Retail even As Sales Boom
Jay Leno on Elon Musk & EVs: “I Think He Should Get ... Credit"
END_OF_DOCUMENT_TOKEN_TO_BE_REPLACED