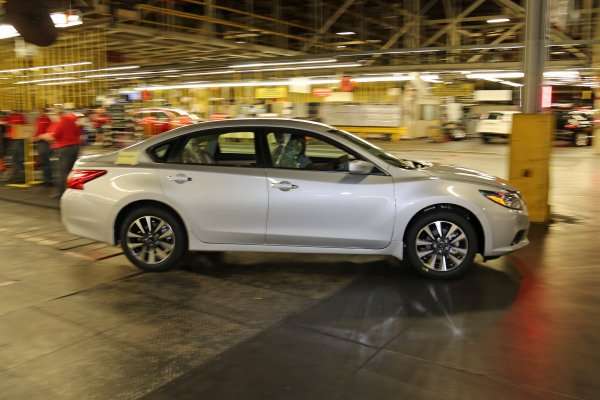 Production on the 2016 Nissan Altima sedan began in Smyrna, Tennessee and pricing for the significantly refreshed car has been announced ahead of it's entry into dealerships next month.
Advertisement

The 2016 Nissan Altima enters showrooms on November 11 as the latest rendition of Nissan's highest-volume vehicle in North America. Made in Smyrna, Tennessee, the Altima features a class-leading 39 mpg on the highway and will begin secondary production in Nissan's Conton, Mississippi plant next week.

Today, Nissan announced pricing for the 2016 Altima, with manufacturer's suggested retail prices beginning at $22,500 before delivery. For this year, both the four-cylinder and the six-cylinder Altima models will have a new SR grade, which emphasizes sport driving with 18-inch alloy wheels, paddle shifting, a rear spoiler, and unique suspension tuning.

New enhancements for the 2016 Altima across the trim lineup include a refreshed exterior to bring in the latest design language from Nissan, similar to what's seen on the all-new Murano and Maxima. Most obvious is the new V-motion grille, accented character lines on the hood, and available boomerang LED headlamps.

Added under the bodywork are new Safety Shield technologies as options in several models of the 2016 Altima. This includes the new Predictive Forward Collision Warning system that won awards when introduced on the Murano.