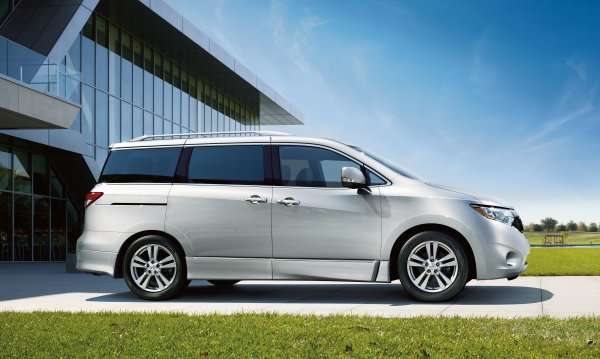 2015 Nissan Quest Pricing Announced and It's Better Than Expected

The Nissan Quest is one of the boldest and most luxurious minivans on the market today. Here's the new 2015 model year price structure for it.
Advertisement

Nissan has announced pricing for the 2015 Nissan Quest minivan, which just entered dealerships nationwide. The Quest is best known for its unusually bold styling for the segment and for its luxurious fittings and trim options.

One-touch powered sliding doors, quick-release fold-flat second and third row seats, and the rear storage well are highlights of the interior ergonomics for the Quest. This year, the LE grade changes to the Platinum grade, new shift logic for the Xtronic CVT boost fuel economy by 2 mpg on the highway and one in the city, giving the 2015 Quest an EPA combined rating of 22 mpg (27 highway).

The Platinum grade sees the Around View Monitor updated with Moving Object Detection and audio systems see the 4.3-inch display updated to a 5-inch screen.

There are four trim models for the 2015 Nissan Quest: S, SV, SL and Platinum. Prices below do not include destination charges.

The 2015 Quest continues to be powered by a 3.5-liter V6 outputting 260 horsepower through its CVT. Vehicle-speed sensitive power steering and four-wheel independent suspension are standard as are all passive safety systems. Option packages include DVD Entertainment, a Bose stereo package, Dual Opening Glass Moonroof option, and a Leather Package, among others.