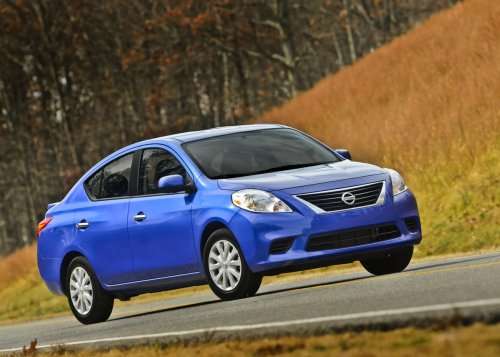 Nissan has released pricing details for the 2014 Versa Sedan model, the best-selling entry-level sedan in the U.S. and the base chassis for the Nissan LEAF. Pricing begins under $12,000.
Advertisement

The nation's best-selling entry-level compact sedan, the Nissan Versa, which for 2014 is seeing a few mid-cycle upgrades and option additions. The 2014 Versa comes in five engine/transmission options and three trim levels. The base model Versa Sedan S five-speed manual starts at $11,990 and the highest-end Versa Sedan SL with an automated continuously variable transmission (CVT) is $16,890.*

The standard engine is Nissan's well-proven 1.6-liter dual overhead cam (DOHC) 16-valve, four-cylinder dual injector. This can be mated to a five-speed standard transmission, a four-speed automatic transmission or a CVT. The CVT may be worth the extra for many, though, as it will give the 2014 Nissan Versa Sedan EPA ratings of 40 mpg highway, 31 mpg city and 35 mpg combined. The base model S with manual transmission receives 27/36/30 mpg city/highway/combined while the 4-speed auto gives 26/35/30 mpg.

For the 2014 model year, Nissan changed the suspension tuning to enhance the sporty feel of the Versa. The SL model begins standard with 16-inch aluminum alloy wheels rather than steel as in previous years. A 4.3-inch display audio interface and SiriusXM Satellite Radio (subscription separate) is also included. Improved seating and high-gloss black pillars are included in both the SV and SL trim levels. A Convenience and Tech package are available for the SV and SL trims (respectively) to upgrade with more premium features.

The 2014 Versa Sedan is the third year of this car's second-generation. It's been a top selling car for Nissan for years, competing in the heavily-contested entry-level compact market. It's built on the same Global V platform that Nissan builds the Leaf and other small vehicles with.

*All prices reported here do not include destination and handling.