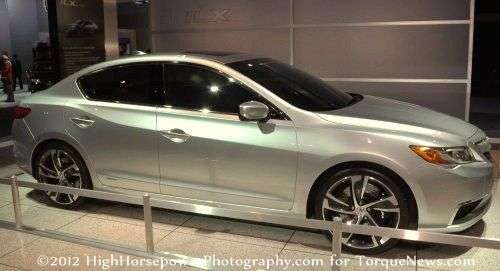 Price points for the entry-level luxury sedan were announced today for this new model, which will come to showrooms later this year.
Advertisement

The concept for the new sedan debuted at the North American International Auto Show (NAIAS) in Detroit back in January and within a month had been finalized as a full offering for 2013, with the surprising note that the new model would also offer the Acura brand's first hybrid.

The ILX will come with three engine packages, a 2.0L standard engine, a 2.4L sportier option with a manual transmission, and a smaller 1.5L hybrid option for better economy thanks to the electrical boost.

Positioned as a gateway model into the luxury brand's offerings, the 2013 ILX is aimed at the younger crowd and its package options showcase that. Based on the Honda Civic model's chassis, the ILX is a upfitted version of that venerable car with styling points to make it unique as well. Base and premium models come with a 5-speed automatic transmission which gives way to a 6-speed manual in the sportier 2.4L engine package.

In base trim, the ILX starts at $25,900 (not including destination fees) and includes a well-appointed, if basic, interior trim and electronics/audio package. This includes the 2.0-liter in-line 4-cylinder engine with EPA estimates coming in at 24mpg city, 35mpg highway or 28mpg overall. This comes with keyless access and pushbutton ignition, smart phone synching for access to Pandora and SMS functions as well as hands-free talking via Bluetooth.

The Premium Package at $29,200 (plus destination) upgrades the interior to include leather trim on the steering wheel, shifter, brake lever, and other accoutrements. Mileage estimates are the same for this trim level and some options such as a multi-view rear camera, and more premium stereo can be added if the full Technology Package is not desired.

The Technology Package, however, comes it at less than two thousand more ($31,400 before destination) and includes the multi-view rear camera, Acura/ELS Surround 10-speaker package with HDD storage, Voice Recognition (for audio, climate, and other controls), and a Song By Voice music selection app.

If you prefer a more sporty ride, the 2.4L engine option with 6-speed manual transmission is available for $29,200 (before destination) as a base package. Amenities can be added, of course. Mileage here will be 22/31mpg with 25mpg as the average.

For the more eco-conscious, the Hybrid package is $28,900 in its base configuration and is also available in the Premium Technology Package upfit for $34,400 (before destination). The smaller 1.5L engine is augmented by a lithium-ion battery pack and motor and gets an impressive 39mpg in the city, 38mpg highway to an average 38mpg overall.

The 2013 Acura ILX will be directly competing with the Cadillac ATS and other entry-level luxury models, but will likely be considered underpowered by those expecting performance from their sedan. In the hybrid arena, however, it will beat most current hybrid luxury models on the market in terms of MPG.