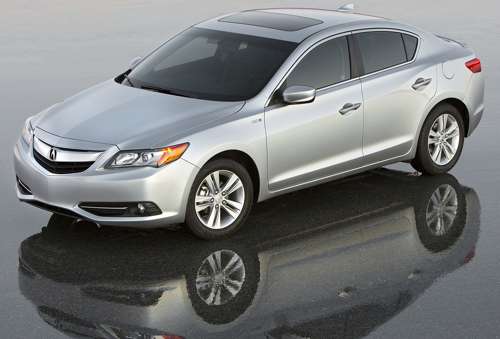 Less than a month after being introduced as a "concept" at the North American International Auto Show in Detroit, Acura has taken the wraps off its compact 2013 ILX with complete details and one fact not previously mentioned.
Advertisement

The 2013 Acura ILX is going to be the brand's first hybrid. The ILX Hybrid makes use of a 1.5-liter inline engine and an Integrated Motor Assist electric motor. Paired with a Continuously Variable Transmission (CVT), the ILX 1.5L Hybrid will deliver an EPA estimated city/highway fuel economy rating of 35/38 mpg.

The standard 2013 Acura ILX will be powered by a 2.0-liter inline 4-cylinder engine producing 150 horsepower at 6,500 rpm and 140 lb-ft of torque at 4,300 rpm. Paired with a Sequential SportShift 5-speed automatic transmission, the ILX 2.0L will deliver an EPA estimated* city/highway fuel economy of 24/32 mpg.

For those seeking more oomph, the ILX can be equipped with a 2.4-liter engine with an output of 201 horsepower at 7,000 rpm and 170 lb-ft torque at 4,300 rpm. Mated to a close-ratio, six-speed manual transmission, the ILX 2.4L will deliver an EPA estimated city/highway fuel economy of 20/29 mpg.

The 2013 Acura ILX compact sedan is an all-new model that is positioned as the gateway into the Acura brand. The primary target customers for the new ILX are Generation Y— successful 20 and 30-somethings moving into the luxury car ranks but looking for high-value propositions in their purchases. "First-time luxury buyers tend to place a high value on exterior styling, affordability and environmental issues, and that's what we have created with the new Acura ILX," said Jon Ikeda, head of the Acura Design Studio, at the announcement today at the Chicago Auto Show. "The strategy behind this new model is to position ILX as the first opportunity for many young buyers to enter the luxury market."

The Acura ILX will be manufactured (using U.S. and globally sourced parts), exclusively at the company's state-of-the-art Greensburg, Indiana plant, one of only three plants worldwide to receive J.D. Power and Associates' 2011 Platinum Award for outstanding product quality, and the top award for any factory in North America. No pricing information on the 2013 Acura ILX has been released yet.