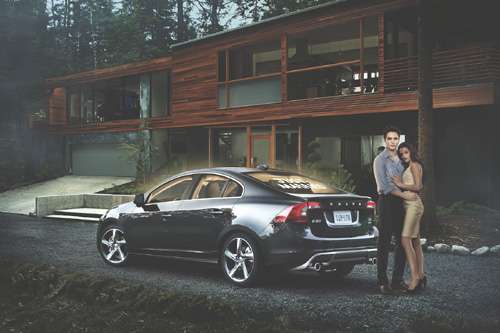 What do Volvos, vampires and Brazil all have in common? It's a Facebook contest revolving around the upcoming premier of "The Twilight Saga: Breaking Dawn - Part 1" that features prizes like a trip to Brazil, a new Volvo S60 R-Design and tickets to the premier.
Advertisement

Now, you might be asking yourself, how does one win a trip for two to Rio de Janeiro with Volvo, which includes a stay in the same luxurious house where Edward and Bella spent their honeymoon? How does one take home the actual 325 HP Volvo S60 R-Design that Edward drove in the fourth installment of the film franchise?

It's easy. All one needs to do is journey to a website called JourneytotheWedding.com and you could be on your way to a dream trip. That is if your dream trip revolves around "The Twilight Saga," which apparently is all adolescent girls can talk about since the demise of the Harry Potter franchise.

As Roddy Roddington would say on The Price is Right, "But wait there's more" as in there is a second chance to win. For the second game, "What Would You Wear?" fans are invited to submit photos or drawings of what they would wear to Edward and Bella's wedding on Volvo's Facebook page. The person who submits the entry with the most votes will win two tickets to attend the world premiere of The Twilight Saga: Breaking Dawn - Part 1 in Los Angeles on November 14. Volvo will also provide the winner with two round-trip airline tickets to Los Angeles, two nights of hotel accommodations, and $500 spending money (visit Facebook.com/VolvocarsUS for official rules and complete details).

Frankly, the second game doesn't interest us because this is a car website after all. That's why we're providing more information about the 325 HP Volvo S60 R-Design that Edward drove in the fourth installment of the film franchise. With a significant increase in horsepower and torque, a new Sport Chassis, unique styling cues and interior treatments, the R-Design becomes "the sportiest and most dynamic Volvo ever."

The S60 R-Design's 3.0-liter turbocharged six-cylinder engine puts out 325 horsepower and a stout 354 lb.-ft. of torque to become the most powerful six-cylinder currently offered by Volvo. This represents net gains of 25 hp and 29 lb.-ft. compared to the T6 AWD. Zero to 60 mph drops to 5.5 seconds (from 5.8 seconds with T6 AWD) while fuel economy remains unchanged from the T6 AWD at 18 mpg in the city and 26 mpg on the highway. The Volvo S 60 R-Design has a starting price of $42,500.

How the Game Works
Beginning October 15, players (ages 13 and up) can register at JourneytotheWedding.com to play the interactive game. In the game, fans make their way to the wedding of Edward and Bella by completing a series of three challenges. The player who finishes the final challenge in the shortest amount of time will win the game. Volvo will announce the winner on or about November 28.

What The Movie's About
Just in case you were wondering, here's a synopsis, courtesy of Volvo. In "The Twilight Saga: Breaking Dawn - Part 1", Bella (Stewart) and Edward (Pattinson), plus those they love, must deal with the chain of consequences brought on by a marriage and honeymoon, and the tumultuous birth of a child... which brings an unforeseen and shocking development for Jacob Black (Lautner). With more of the romance, passion, intrigue and action that made "Twilight", "The Twilight Saga: New Moon" and "The Twilight Saga: Eclipse" worldwide blockbusters, "The Twilight Saga: Breaking Dawn - Part 1", based on Stephenie Meyer's bestselling book series, begins the conclusion of the tale of vampire love, boundless friendship, acceptance, and finding your true self.