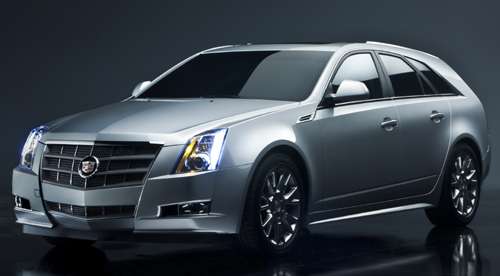 The fastest-selling 2012 vehicle, based on days on the lot before they sell, is, of all things, a station wagon, according to a report posted by TrueCar.com on its blog.
Advertisement

Granted, it's probably one of the best station wagons currently on the planet, but it's still interesting to see the 2012 Cadillac CTS Wagon as the fastest selling 2012 model on deal lots with a current two days in inventory before it sells, according to TrueCar.com.

The average days on dealer lots was 45 days, according to TrueCar.com. The vehicle that takes the longest to sell is the Nissan NV, a commercial van, at 94 days, followed by the Fiat 500 at 81 days.

Now common sense would tell us that the CTS Wagon is a specialty product that is most likely only ever sold through direct orders. We can't imagine too many Cadillac dealers stocking them for casual buyers but it's still amazing to see them turn so quickly. Sign us up for a Cadillac CTS-V station wagon when our Lotto numbers hit.

Special orders probably also explains why the Hyundai Equus comes in second on the list at just four days in inventory before being sold. It, like the CTS Wagon, is a niche vehice but its sales have been strong.

Here are the other Top 10 2012 models and how long they sit on average on dealer lots. Some benefit from strict just-in-time manufacturing that times production to need while others are simply fantastic cars.

Notice a surprising entry on that list? No, it's not the Honda Ridgeline. It's the Nissan Leaf. It's showing quick turnarounds on dealer lots as is the new Camry Hybrid as well as the new Honda CR-V. All three, though, could be to reduced supply because they are new vehicles.

Also, there's another station wagon on the list: the Subaru Impreza Wagon at 5 days. Again, it's good to see station wagons still doing well in some segments of society.

According to the January 2012 True Trends Report, large SUVs, large cars, and large trucks are where the best potential inventory-based discounts will be seen. On average, large SUVs are staying in inventory for 86 days, while large cars and large trucks are on-lot for 73 and 69 days respectively. The average days in inventory is 45 days. Subcompact cars have an average inventory stay of 26 days, luxury SUVs at 33 days, small cars at 34 days, and midsize SUVs at 40 days.

Ajohn wrote on February 8, 2012 - 6:55pm Permalink
I love seeing that Cadillac is doing well, especially selling the CTS Sport Wagon. I love it and want to see them on the road more frequently. Can you report what area of the country/state's are selling them well? Can't wait to drive the ATS - awesome ride!