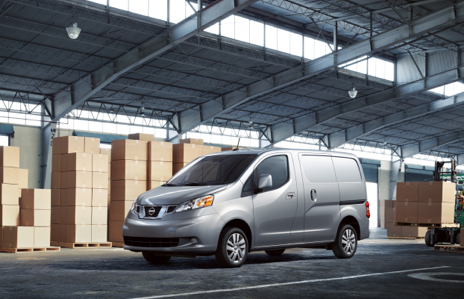 Lost amidst the hype of the new Nissan 370Z introduced at the Chicago Auto Show (still ongoing in the Windy City through Feb. 19) was the North American intro of the Nissan NV200 Compact Cargo Van, which is hitting the market at the right time to make a major impact.
Advertisement

The Nissan NV200 is set to join the growing lineup of Nissan Commercial Vehicles in early 2013 at 300 Nissan Commercial Vehicle dealerships nationwide. The NV200 follows the full-size Nissan NV Cargo, introduced in spring 2011, and the recently announced full-size Nissan NV Passenger that goes on sale this spring. The Nissan NV200 provides a new entry point for current cargo van and small pickup buyers looking for a compact, efficient alternative to their larger, less fuel-efficient vehicles.

The 2013 Nissan NV200 is built on Nissan’s proven compact commercial platform and features an efficient 2.0-liter 16-valve DOHC 4-cylinder engine. The engine is matched with a responsive and efficient Xtronic CVT® transmission.

The NV200 is primed to make an impact because, like the Ford Transit Connect, it is a right-sized van with rising gas prices and a tighter squeeze on the small business owners who don’t need a full-sized van (think florists, hardware stores, etc.)

While new to North America, the Nissan NV200 compact van is already in use in more than 40 countries around the world. It won the 2010 International Van of the Year award in Europe, the 2010 Commercial Delivery Van of the Year in China, and the 2011 Universal Design Award from Universal Design GMbH, a German organization dedicated to promoting the convergence of design and the emerging importance of customer needs. NV200 has also established a presence as the strong segment leader in Japan with a wide-ranging lineup that includes a taxi version. The taxi version is primed to be the next major taxi in the U.S. with its rollout in New York City as the official taxi of the Big Apple in 2013.

NV200 offers a large cargo capacity of 123 cubic feet with a small exterior footprint. Unique for North America, the NV200 body has been extended 7.9 inches (200 mm) versus the models sold in other global markets. This longer body length offers additional cargo carrying capability for North American customers. (Of course we just have to have a super sized version in North America.)

Measuring 186.2 inches in overall length, on a 115.2-inch wheelbase, NV200 has a 1,500-pound (estimated) maximum payload. The cargo area dimension between the wheelhouses allows for loading standard U.S. 40x48-inch pallets. Added utility is provided by the standard integrated mounting points, which allow installation of racks and shelves without drilling into the sidewalls, and six available floor mounted cargo hooks in the cargo area.

No price has been announced yet for the Nissan NV200 that goes on sale in early 2013.