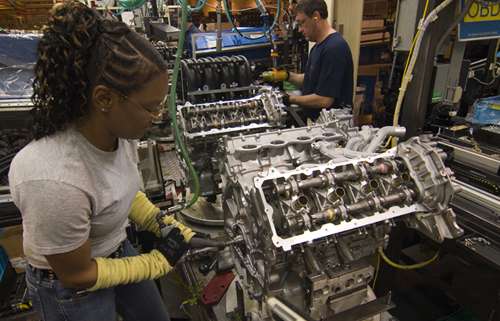 Renault-Nissan CEO Carlos Ghosn and Dieter Zetsche, chairman of the Daimler Board of Management and head of Mercedes-Benz Cars, have announced a major production alliance between the two companies that will have an impact in Tennessee.
Advertisement

Nissan is going to be building 250,000 Mercedes-Benz 4-cylinder gasoline engines annually at its powertrain assembly plant in Decherd, Tenn. (The Decherd facility will produce engines for Mercedes-Benz and Infiniti models.)

The move helps Mercedes overcome instability in the Euro because the engines are going to put into the Mercedes-Benz C-Class, being built at Daimler’s vehicle plant in Tuscaloosa, Ala. The engine building alliance begins in 2014.

Nissan began powertrain assembly in Decherd in 1997. Today it manufactures 4-, 6- and 8-cylinder engines for the complete lineup of U.S.-produced Nissan and Infiniti vehicles. The plant also houses crankshaft forging and cylinder block casting operations. In 2011, Decherd produced more than 580,000 engines on a covered area of more than 1.2 million square feet (111,000 square meters).

“This is the newest milestone in our pragmatic collaboration and our most significant project outside of Europe so far,” said Ghosn in a statement made available to TorqueNews. “Localized capacity reduces exposure to foreign exchange rates while rapidly enabling a good business development in North America – a win-win for the Alliance and Daimler.” The collaboration marks the first production of Mercedes-Benz engines in the North America Free Trade region.

“In the context of our Mercedes-Benz 2020 growth strategy, we have decided that we will expand the production capacities required for this close to the customers. Through the strategic extension of our cooperation with Renault-Nissan we can realize near-market engine production in the NAFTA region on attractive economic terms and make optimum use of synergies arising from the cooperation,” Zetsche, said in a news release. “Thus we are systematically broadening our manufacturing footprint in this important growth market.”

With Mercedes-Benz 2020, Daimler aims to get back to the top in premium-segment unit sales by the end of this decade at the latest. One element of that strategy is to offer a wider range of products in the compact segment such as with the C-Class that is receiving the Tennessee Nissan engines.

* Joint smart/Twingo architecture: The project is on track for launch in the early first quarter of 2014. Two-seater smart vehicles will be produced at Daimler’s plant in Hambach, France, and four-seater smart and Renault production are slated for Renault’s plant in Novo Mesto, Slovenia.

* All-new entry-level city van project for Mercedes-Benz: The project is on schedule with expected launch in late 2012. Manufacturing at Renault’s plant in Maubeuge, France.

* Powertrain cross-supply: The Alliance is supplying Daimler with compact three-cylinder gasoline engines to be used in smart and Twingo vehicles and four-cylinder diesel engines to be used in the jointly developed light commercial vehicle and in Mercedes-Benz’s next generation of premium compact cars. Daimler will supply Nissan and Infiniti with four- and six-cylinder gasoline and diesel engines from the current and future engine portfolio as well as with automatic transmissions.