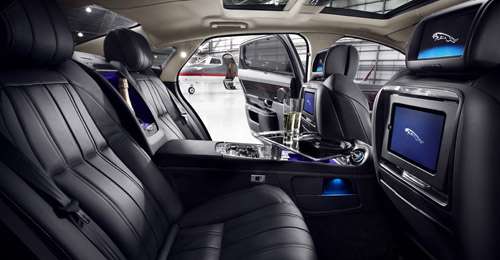 Most Luxurious Jaguar Ever Unveiled at Beijing Auto Show

The sneak peak that Jaguar gave over the weekend of its most luxurious model ever turns out to be the 2013 Jaguar XJ Ultimate.
Advertisement

Only 30 of the models are going to be available in the United States. You can buy one for $155,000 in any color you want – as its black Amethyst. Discreet external detailing and badging differentiates the Ultimate from other XJ variants.

So, what makes it the most luxurious ever? It's going to have a hand-crafted interior. As first suggested on Saturday after a review of the sneak peak video, it will also individually tailored rear seats are trimmed in semi-aniline premium leather with power adjustment and recline, lumbar support, massage function and climate controls. (Click on TorqueNews Facebook Page to See 2013 Jaguar Ultimate XJ Gallery)

This is going to be a car for those who like to be driven and not so much for the driver as revealed in other amenities. The rear seat opulence includes: a rear business table, machined from solid aluminum with piano black trim, powers into position at the touch of a button; a pair of bespoke champagne flutes resides in a dedicated storage area beneath the powered table; and what's the point of champagne flutes without a champagne chiller between the rear seats cools the bottle to the perfect temperature and automatically presents it when the cabinet is opened.

Just to make it clear but this is no wedding party special. It's for the CEO on the go. It also comes with a full-length, leather-trimmed center console features phosphor blue accent lighting and stowage areas to extend the car’s business usability; each rear-seat passenger is provided with an iPad and keyboard, housed and charged in dedicated leather-trimmed docks in the rear of the front seats; and a rear-seat entertainment package with twin headrest-mounted screens and wireless headphones.

The detail changes applied to the XJ Ultimate, Jaguar said in a press release, serve to subtly enhance the inherent rightness of the car’s design, making it clear that this is the luxurious flagship of the range. The lower front air intakes are reshaped and chrome finished, matching the powerful Jaguar grille, while LED daytime-running lights underline the assertively shaped headlamps.

The 2013 Jaguar XJ Ultimate will go on sale in late 2012. You might want to place your orders now.

Toyota's First EV Will Have a Name of BZ: Toyota BZ
First Videos From Inside The Boring Company's Las Vegas Loop
END_OF_DOCUMENT_TOKEN_TO_BE_REPLACED