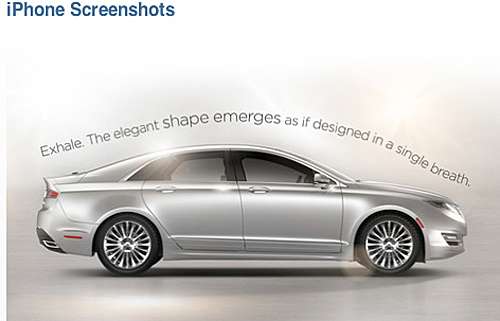 Lincoln has hitched its wagon to the rising star that is the iPad in an attempt to generate interest and possibly sales of the 2013 Lincoln MKZ.
Advertisement

The new Lincoln MKZ iPad app (which also works on the iPhone and iTouch because you don't want to slight any members of the Apple family) can help you stay abreast of the latest developments.

Be first to get details about the all-new 2013 Lincoln MKZ. Experience it as you prefer by downloading the iTunes Lincoln MKZ app from the iTunes store.

For an in-depth appreciation, Lincoln presents this elegant new sedan with a free-flowing, visually captivating tour. It also features a quick vehicle overview, from either Specs or Gallery from the Contents wheel in the main menu tab.

You will be able to explore surprising features, such as the retractable panoramic roof, push-button shift, Lincoln Drive Control, advanced driver-focused technologies and unexpected powertrain options - including the Lincoln MKZ Hybrid.

View exterior colors, explore the wide-open driver environment in 360˚ (as if you're there), and more. Don't miss the opportunity to see yourself in Lincoln MKZ by creating your own photomosaic made up of hundreds of tiny Lincoln MKZ images. Then share with your friends.

No, we admit. We have resisted downloading the app just to get our own photomosaic (but it would probably make a heckuva holiday card image).

So why all the hype? Lincoln needs to hit it out of the ballpark with the 2013 Lincoln MKZ to ensure the success of the brand going forward.

This is the first Lincoln product to come out under Lincoln's new director of design Max Wolff and it demonstrates what a difficult job he has ahead of him. At its introduction in New York City, Wolff said the luxury sedan invoked "modern simplicity." He seemed most proud of the front fascia's split-wing grille, which he poetically described as "inspired by eagle's wings."

Wolff said he made a conscious effort to bring the interior and exterior design teams at Lincoln together to work in the same space. One of Wolff's first steps was the construction of the all-new Lincoln Design Studio in Dearborn, Mich. Under his direction, construction of the 40,000-square-foot studio began in early 2011 and ultimately will house more than 180 modelers, engineers, stylists and designers in a space that encourages creativity and collaboration.

He said when interior and exterior design teams work apart it is "sometimes hard to keep the momentum going." Having them work in the same space encourages the sharing of ideas. "We can come up with a simple vision," Wolff said.

Maybe you can download the Lincoln MKZ iTunes app and get the same excitement that Wolff does. If not, you'll at least have a photomosaic to call your own.