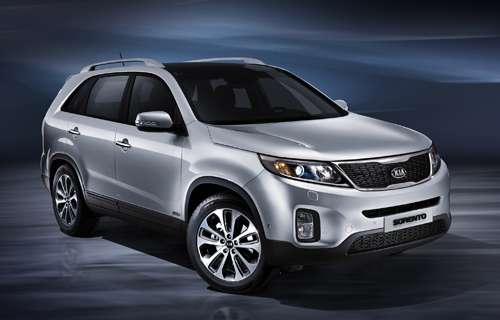 Kia, which continues to set sales records, is giving a makeover to its top-selling U.S. vehicle: the 2013 Kia Sorento.
Advertisement

Kia’s hugely successful Sorento CUV will receive a host of significant improvements when the new upgraded model goes on sale later this year in most markets. Significant changes include a re-engineered body shell, enhanced powertrains for best-in-class fuel economy with lower emissions; improved ride; handling and refinement; additional convenience and safety features; and a fresh new look for the exterior.

It's a big step that Kia is taking because it is gambling on a successful vehicle maintaining its popularity. However, manufacturers seem to be learning lessons from Toyota and Honda, especially Honda, and are shaking up their products mid-term to stay fresh.

“Since its introduction in 2009, the second-generation Kia Sorento has achieved more than 620,000 sales around the world. Today, it is manufactured in Korea and the USA, attracting over 130,000 U.S. customers last year to rank as the best-selling Kia model in the States for the second year in a row,” said Thomas Oh, Kia’s executive vice president & COO of the International Business Division, in a news release. “We have given very careful attention to feedback from owners, and the upgraded Sorento is not just a cosmetic exercise, but a major step forward for our popular CUV.”

LEDs have become the design tool of choice for less expensive vehicles like the Sorento. It allows OEMs like Kia to make their vehicles look a lot more expensive without major investments in expensive lighting design that would previously have been cost prohibitive. It's the LED movement that is finally beginning to make cars look more distinctive.

Inside the five or seven-seater cabin, there are more soft-touch surfaces plus a new LCD instrument cluster, new center stack with 8-inch display screen, and a new console featuring a straight-gate selector with a leather-booted lever on automatic
transmission models – reinforcing the vehicle’s more luxurious character.

Offered in black or beige cloth or leather, the interior can be bathed in natural light through a larger optional panoramic sunroof with no center cross beam and a powered blind. This feature is one that has to be seen to be believed. It creates such an open cabin that it belies the Sorento's compact cabin size.

Kia Sales Juggernaut
Kia Motors America's momentum continues to be on a role with best-ever May sales of 51,771 units, a 7.4-percent increase over the same period last year. Year-to-date sales are up 18.7 percent, and May also saw the sale of Kia's four millionth vehicle in the U.S. (since entering the market in 1994) and extended the brand's run of consecutive monthly sales records to 21.