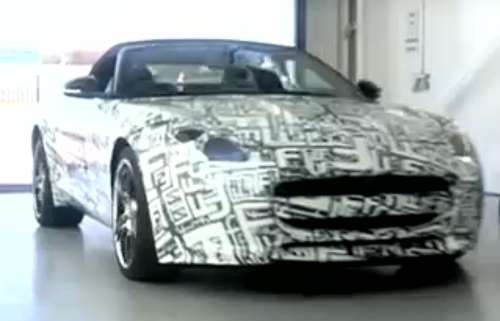 This time next year there should be a new cat prowling the world's highways: a Jaguar F-Type, a two-seat sports car that borrow heavily from the Jaguar legacy of great sports cars. Its upcoming production was announced at the New York Auto Show.
Advertisement

The Jaguar F-TYPE will launch as a convertible becoming the fourth model in the current line, along with the XF sports sedan, the XJ luxury sedan and the XK coupe/convertible. Unfortunately, at this point only a video screen grab of a heavily camouflaged prototype is available.

Benefitting from Jaguar's expertise in aluminum vehicle construction, the Jaguar F-TYPE will focus on delivering a rewarding drive experience thanks to a light-weight frame that is incredibly studrdy. A range of engines will be available, including a new power plant family. Jaguar wouldn't expound on the power plants but claims "all will deliver stunning sports car performance."

Speaking at the New York Auto Show press days, Adrian Hallmark, Global Brand Director, Jaguar Cars, confirmed: "We showed the C-X16 concept in September 2011, and the reaction to it has been so positive that we've accelerated our development of an all-new Jaguar sports car. That car will be called the Jaguar F-TYPE, and it will be unveiled in production form later this year.

"The core appeal of Jaguar's cars is their sporting heart, and that heart will beat stronger than ever before in the F-TYPE. Its development is a vivid representation of the confidence and ambition of the Jaguar brand, and the desire amongst our engineers and design team to produce a world-leader in a market segment that we have been absent from for too long. But no longer, the F-TYPE is coming."

Jaguar said the beginning of April marks the point at which the rigorous development program for the Jaguar F-TYPE moves into the final road testing phase. Engineering prototypes are now being placed into service at Jaguar's Castle Bromwich plant in the British Midlands. This is the same plant that will build the production car.

Ian Hoban, Jaguar's Vehicle Line Director said in a news release, "The engineering development of the F-TYPE has focused on delivering a heightened level of dynamic driving reward. We are excited about our progress to date and are looking forward to soon being able to demonstrate what we have achieved."

Ian Callum, director of design, added, "A true sports car needs to be pure in both its purpose and its form; to have the opportunity to produce such a car for Jaguar has been a privilege both for myself and for my team. The C-type, D-type and E-type Jaguars were all sports cars that held true to this principle in their era, and the F-TYPE will hold true to that same principle in its time, a time that is soon to arrive."

Full Jaguar F-TYPE technical and model range details will be announced later in 2012. It will go on sale in mid-2013.

The night of the announcement Jaguar held an exclusive reception to celebrate the F-TYPE. (Well, it couldn't have been that exclusive. I was invited.) Grammy-winning musician and producer Wyclef Jean, comedian and actor Tracy Morgan and actor Michael Williams, were on hand and shared their personal Jaguar stories and memories.

Guests attending the event, held at STK in New York’s Meatpacking District, were treated to the unveiling of a Jaguar XKR redesigned by renowned graffiti artist Kaves. Other exceptional Jaguar vehicles were on display, including silver C-Type and D-Type Jaguars, representing the classic British brand’s long-time commitment to creating some of the best automobiles in both luxury and performance capabilities.

"In a world of mass market luxury, Jaguar cars stand out for the seductive effect of their design, their rich luxury interiors and their arresting performance," said David Pryor, Brand Vice President, Jaguar North America. "We're very excited to soon be adding the F-TYPE to our incredible product line-up.”

Tesla Giga Berlin's New Hurdle: It's Not Only the Gov't, but Now Tesla Itself
Teslas Are Sold Out Until 2023, But The Timing May Reverse
END_OF_DOCUMENT_TOKEN_TO_BE_REPLACED