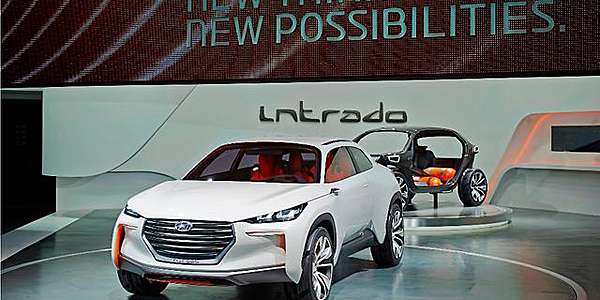 Is the Intrado a Hyundai Genesis SUV?

That stunning new Hyundai Intrado garnering lots of attention at the Geneva Auto Show could actually be the basis for a Hyundai Genesis crossover according to one interview out of Australia with a top Hyundai Europe executive.
Advertisement

Matt Campbell, senior editor with CarAdvice.com, reports, "The premium Hyundai Genesis lineup could soon see the addition of an SUV variant, according to one of the senior-most executives of the brand’s European arm.

"Allan Rushforth, senior vice president and chief operating officer of Hyundai Motor Europe, suggested to CarAdvice at the Geneva motor show that a luxury-focused SUV would be a logical offshoot for the Genesis line."

Rushforth also told Campbell, "I think individually if you look at our product awareness, it historically has been highest in SUVs – which was our heritage eight to ten years ago with products like the Tucson [now ix35 in Australia] and Santa Fe.

“Public awareness of Hyundai tended to correspond with their awareness of our SUVs – so theoretically, the gap between those vehicles and where we want to be with Genesis is less than perhaps some of the vehicles that came later and have still got a reputation to build. I suppose that’s a long way of saying maybe.”

Here are some details on the Intrado from its introduction at the Geneva Auto Show: "Intrado is powered by a next-generation hydrogen fuel-cell powertrain that utilises a Li-ion 36 kW battery. Refueled in just a few minutes, Intrado has a range of more than [375 miles] and emits only water. In addition to increased range, Intrado promises more responsive and agile driving dynamics, thanks to the reduced weight and greater efficiency of its powertrain."

Lets throw this hypothetical out there. Could the introduction of a Genesis crossover be the first step towards developing an upscale brand for Hyundai along the lines of Lexus and Infiniti? Granted there is a weakness in that thinking because the Equus is above the Genesis but that's easily solved by renaming the vehicles with the dreaded alphanumeric badging like Kia is doing with the K900.

Hyundai could offer four models in the Genesis lineup: a coupe, the sedan, the crossover and the upscale rear-wheel drive sedan. We'll leave the naming to the trademark attorneys.