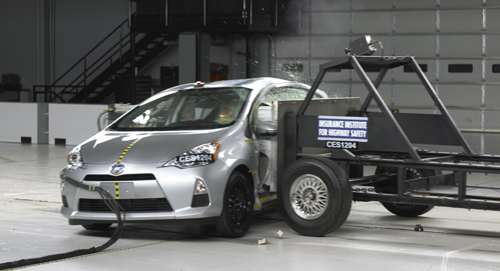 The Insurance Institute for Highway Safety has added the 2013 Chevrolet Malibu Eco, 2012 Hyundai Azera and the 2012 Toyota Prius C to its list of vehicles earning the Top Safety Pick designation.
Advertisement

The Malibu Eco is a redesigned model. The 2012 Malibu continues to be sold and also is a Top Safety Pick.

The Azera was previously tested for front and side crashworthiness. It meets the criteria for the award by earning good ratings in a recent rear impact test assessing whiplash protection and a roof strength test to measure occupant protection in rollover crashes.

The Prius c is a new model and joins the Prius and Prius v as IIHS award winners.

To measure roof strength, a metal plate is pushed against one corner of a vehicle's roof at a constant speed. The maximum force sustained by the roof before 5 inches of crush is compared to the vehicle's weight to find the strength-to-weight ratio. This is a good assessment of vehicle structural protection in rollover crashes.

Vehicles rated good for rollover protection have roofs more than twice as strong as the current federal standard requires. The Institute estimates that such roofs reduce the risk of serious and fatal injury in single-vehicle rollovers by about 50 percent compared with roofs meeting the minimum requirement. A new federal standard for roof strength will phase in beginning with 2013 models.

"When we launched Top Safety Pick in 2005, consumers had 11 models to pick from. Six years later, finding a winner that fits most budgets and lifestyles is easy," says Institute president Adrian Lund. "It's a testament to the commitment automakers have made to going above and beyond minimum safety standards."

Again this year every major automaker has at least one winner. Subaru remains the only manufacturer with the distinction of earning awards for every model it builds. Subaru picks up 5 awards, including one for the redesigned Impreza, a small car.

The Institute awarded the first Top Safety Pick to 2006 models and then raised the bar the next year by requiring good rear test results and ESC as either standard or optional equipment. In 2010, the Institute toughened criteria by adding a requirement that all qualifiers must earn a good rating for performance in a roof strength test to assess protection in a rollover crash.

The Institute groups winners according to vehicle type and size. Lund advises consumers to keep in mind that size and weight influence crashworthiness. Larger, heavier vehicles generally afford better occupant protection in serious crashes than smaller, lighter ones. Even with a Top Safety Pick, a small car isn't as crashworthy as a bigger one.

The IIHS's frontal crashworthiness evaluations are based on results of 40 mph frontal offset crash tests. Each vehicle's overall evaluation is based on measurements of intrusion into the occupant compartment, injury measures recorded on a 50th percentile male Hybrid III dummy in the driver seat, and analysis of slow-motion film to assess how well the restraint system controlled dummy movement during the test.

Side evaluations are based on performance in a crash test in which the side of a vehicle is struck by a barrier moving at 31 mph. The barrier represents the front end of a pickup or SUV. Ratings reflect injury measures recorded on 2 instrumented SID-IIs dummies representing a 5th percentile woman, assessment of head protection countermeasures, and the vehicle's structural performance during the impact.

Rear crash protection is rated according to a 2-step procedure. Starting points for the ratings are measurements of head restraint geometry — the height of a restraint and its horizontal distance behind the back of the head of an average-size man.