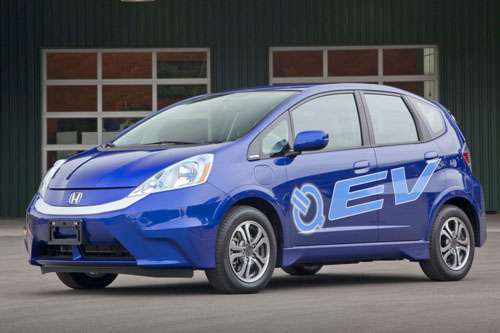 The 2013 Honda Fit EV has been given the highest fuel-efficiency rating ever by the Environmental Protection Agency of a combined 118 miles per gallon equivalency rating, or MPGe as it is more commonly known.
Advertisement

That groan you hear is from the beleaguered Mitsubishi executives who until this morning held the title with the Mitsubishi i-MIEV, an electric vehicle that had given the Japanese automaker some footing (and more important respectability) in the electric vehicle industry, with its 112 MPGe.

The 2013 Honda Fit EV also beats the Mitsubishi in the categories of energy efficiency and battery capacity. The Fit also goes further on a charge at 82 miles to 62 miles. There are these other factors: the Fit is just a superior car and it's a Honda. People buy Hondas. Who buys Mitsubishis anymore?

Honda's EV stacks up pretty well against the competition. It surpasses the EPA efficiency and range ratings of the Ford Focus Electric (105 MPGe, 76-mile range) and Nissan Leaf (99 MPGe, 73-mile range). Those two, and the Chevrolet Volt, are going to be its real competition in the consumer market when it comes to electric vehicles.

There's another factor that might help the 2013 Honda Fit EV dominate the market: relatively quick charge time. The Fit EV battery can be recharged in less than 3 hours from a low charge indicator illumination point when connected to a 240-volt circuit. Most batteries are looking at a four-hour recharge time.

Plus, as Honda is wont to point out, the Fit is going to have a little zip under its hood. The Fit EV's 92 kilowatt (123 horsepower) coaxial electric motor generates 189 ft-lb of torque (that's a lot for a little car), and is teamed to a chassis with a fully-independent suspension and a driver-selectable 3-mode electric drive system adapted from the CR-Z Sport Hybrid.

About the only drawback at this point is going to be availability. Honda plans to begin leasing the battery-electric commuter vehicle to customers in select California and Oregon markets during the summer of 2012, followed by an East Coast rollout in 2013.

The downside is Honda is not going to be selling these electric Fits – at least in the beginning, which means there is no information yet on pricing. By only leasing the vehicles, Honda exercises greater control over the fleet that is out there. (All seems reminiscent of GM back in the days when it leased EVs in the 1990s.)

Expect demand to be strong for the 2013 Honda Fit when it does start leasing on the West Coast. Just like the Ford Focus, it's already a good car that is going to have massive amounts of appeal to those consumers who want to say goodbye to the gas pump.