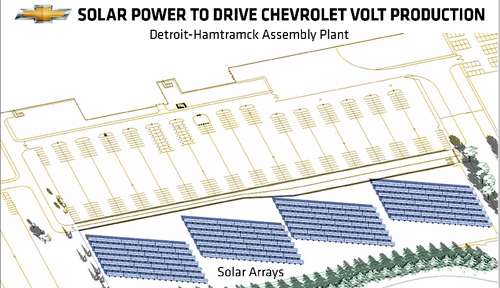 Would you spend $3 million to save $300,000? Of course not, but an electric company is on GM's behalf through its $3 million investment in a photovoltaic solar array at the General Motors Detroit-Hamtramck assembly plant to help power the home of the Chevrolet Volt electric car.
Advertisement

According to a GM press release, the 516-kilowatt project, announced Wednesday by GM and DTE Energy, will generate electricity capable of charging 150 of the electric cars with extended-range capability every day for a year – a total of 54,750 Volts. The 264,000-square-foot project is expected to be completed at the end of the summer and will save the facility approximately $15,000 per year over the 20-year easement agreement. The Detroit-Hamtramck facility was chosen because it has available space for the array and because it is home to the Volt.

The Detroit-Hamtramck installation is part of DTE Energy’s SolarCurrents pilot that calls for enough photovoltaic systems to be installed on customer property or rooftops during the next five years to generate 15 megawatts of electricity throughout Southeast Michigan. DTE is investing $3 million in the array at Detroit-Hamtramck.

GM earned $4.7 billion in profits in 2010 so the following comment from Bob Ferguson, vice president of GM Public Policy. “Making sustainable choices is good for both the environment and our bottom line. Obviously cost savings is critical for GM, and the ability to save $15,000 per year while being environmental serves us well.” One would think that $15,000 a year is Daniel Akerson's shoe shining budget.

DTE Energy and GM will build the array on a six-acre tract of land located on the south side of the plant. This placement allows it to face true South to maximize solar output. The array will complement other green activities at the plant, which was recently named a Michigan Clean Corporate Citizen for its commitment to the environment. Environmentalism is evident by a 16.5 acre certified wildlife habitat on the site and the voluntary installation of an oxidizer that greatly reduces the amount of carbon dioxide and carbon monoxide released into the atmosphere. In addition, efficient lighting upgrades and other energy efficiency projects will save the plant nearly $3 million per year in energy costs.

LG's New EV Battery Plant Is a Welcome News for Tesla
Tesla Giga Berlin's New Hurdle: It's Not Only the Gov't, but Now Tesla Itself
END_OF_DOCUMENT_TOKEN_TO_BE_REPLACED